Every day in October I will be rocking an A To Z Blog Challenge about my terribly terrific tattoos. Every day a new letter. Today is October 29 and the letter of the day is X.

X is for an X Yankee Fan.

I grew up in Boston. Loved the Red Sox. But it was an abusive relationship. They kept hurting me. Real bad. They would flub a season, then get into contention again and find a new way to fail, the sports team equivalent of an abusive spouse bringing home flowers and promising they had changed. The 1986 World Series was the proverbial last straw. It’s what made me want to tie the whole team to the bed and set it on fire. The Red Sox were one out away from beating the perenially hapless NY Mets in Game 6 and winning their first World Series since 1986. Then this happened. The worst collapse in the history of the World Series.

Bill Buckner was run out of town. Every Red Sox fan in the whole of New England fell into a deep funk. Most are still there, even with the success they have seen in the last decade. At that point I was 13 years old but I already knew I was going to move to New York City. I figured the most treasonous thing I could do to that shit-hole of a city would be to become a New York City baseball fan. The Mets were out of the question, because well, they were the Mets. So it was the Yankees for me. The Evil Empire. I arrived in NYC at the right time to be a Yankee Fan. Derek Jeter, Mariano Rivera, Jorge Posada all wormed our way into the big apple in the same season.

In 2003 I quit drinking, and that really propelled my fandom. I knew I was going to have a ton of extra time and cash on my hands, so I fix both problems by becoming a Yankee Season Ticket holder. This was at a time when there was a WAITING LIST to buy season tickets. Now you can’t even give tickets away for most games, but at that point Yankee tickets were still a big F’in deal. I was able to wiggle around the waiting list though because I asked for tix in the ALCOHOL FREEE section. Yup, once upon a time, the Yankees had two ENTIRE SECTIONS that were off limits for alcohol. A sort of “family friendly” section if you will. Of course there was no waiting list for those.

I kept those seats until the real Yankee Stadium closed. And even had them for the first two seasons at the new monstrosity. But by then I had lost my lustre for a full season so I was sharing with Beach and Skillman. At the beginning of the first year in the new stadium – we made a pact – if the Yankees win the World Series we are all going to get Yankee Tattoos. and if the Series is won by walk home homer by A-Rod we would also get his number, 13 tattooed.

Well they won the world Series that season, and it felt great. Sure they had a team of overpriced free agents that complemented their home grown talents, two of which, Jeter and Rivera, are first ballot Hall of Famers, and that was also a breakout year for Robinson Cano. Point being, with the exception of Johnny Damon, it felt like a Yankee team.

But after the season things went south. Fast. George Steinbrenner’s health rapidly declined and he was barely able to make his victory lap around the Stadium in a golf cart on opening day. His doofus sons Hal and Hank were left in charge and that’s when things really started to unravel. First of all, after the first year glow faded, it was obvious. The new Yankee Stadium sucks. The Yankees got outdone by the Mets there big time. And to fund that stadium they priced so many of the best seats for Wall Street Criminals that they now sit empty during the games. This has got to be a big hit to the morale of the players, not to mention an embarrassment for everyone watching on TV.

But what really put an end to me caring bout the Yankees, and also led to an apathy about baseball in general, was the Derek Jeter contract negotiations at the end of the 2010 season. Love or hate the Yankees, it’ hard to find people with negative things to say about Derek Jeter. He’s always been a hard working, clutch hitting, classy ball player. And a leader in the locker room. After Don Mattingly retired in 1995 the Yankees went without a captain until the appointed Jeter to the role in 2003. That was a big deal.

So when his contract was up for renewal in 2009 he was looking for a big fat juicy one. One like they gave to A-Rod and seemingly every free agent who was ever available. Didn’t seem like much to ask. In the George Steinbrenner Era, they would have had fierce negotiations behind closed doors and would have hammered out a deal. And Derek would have stepped in front of a microphone and delivered a speech about how wonderful it was to be a Yankee.

Instead thew Steinbrenners gave GM Brian Cashman the green light to dog Jeter in the NY Sports media – and he did. And it made me realize that the era had ended. George Steinbrenner may have been an asshole, but he was an entertaining asshole, and he CARED about his team WINNING, at almost any cost. George was gone, and he wasn’t coming back. And his kids most certainly were’t going. Nothing last forever… Except for these stupid fucking tattoos. 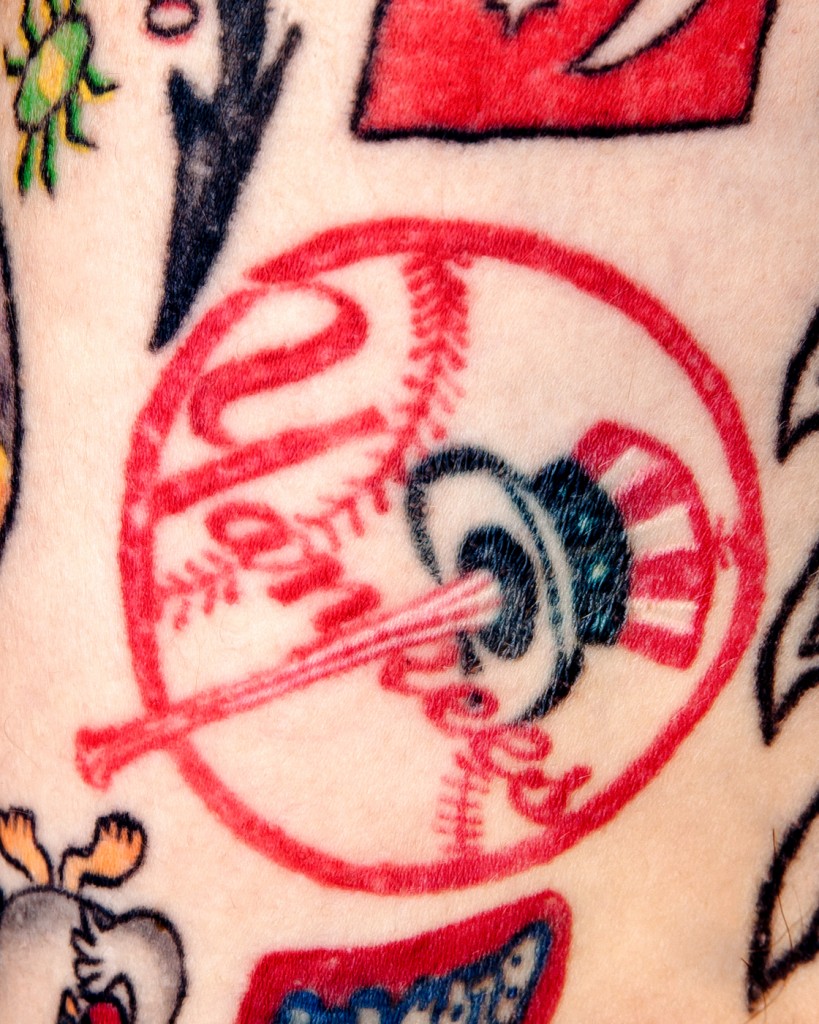 Too bad it wasn’t the lick em / stick em kind.

But it’s OK, because I watch a real man’s sport now.