Every day in October I will be rocking an A To Z Blog Challenge about my terribly terrific tattoos. Every day a new letter. Today is October 23 and the letter of the day is S.

S is for Sombrero.

Mexico. The exalted land of dreams. Where the hillsides run green (and sometimes brown) from the trail of the Mary Jane plants and the skies are dotted with puffy bursts of cocaine. And the seas are bottomless pools of cervesa. And everybody is always on vacation. At least the Americans. What’s not to love. My 40th birthday was fast approaching and I was trying to come up with a tattoo to mark the date. I had been listening to a lot of Mariachi El Bronx this summer, and a couple weeks after my birthday I’d be heading to Las Vegas with Stauds to see them play a couple of shows. Their multi-night stand at the Cosmopolitan was booked to coincide with the championship fight between Floyd “Money” Mayweather and the Mexican Sensation Saul “Canelo” Alvarez. That fight was scheduled to coincide with the big Mexican Independence Day Weekend Celebrations. (Anyone have any idea who or what they became independent of? No? Me neither).

When the day came, I couldn’t decide between a Sombrero and a Lucha Libre mask. I’m not even sure how I made it to 40 years old and 40 plus tattoos without a lucha libre mask, given my huge collection of the masks and the fact that I once set myself on fire while wearing one onstage in Las Vegas. Seriously. But that’s a whole other story.

When I made my way to Wooster Street Social Club and had to tell Luke Wessman what I wanted, I still hadn’t made up my mind. On one hand I wanted a sombrero, because who has a tattoo of a sombrero? On the other hand, Lucha Libre masks were so near and dear to my heart and throat (where my skin graft is). So I asked for both. A Lucha Libre mask wearing a Sombrero. Luke looked at me funny. Then thought about it. Then looked at me funny again, then said “You sure?” I assured him I was sure and he set about drawing it up. After a few tweaks he had something we both dug and made the final stencil.

Once he started needling me, the other guys in the shop came over to take a look, all of them said they liked it because though they had seen plenty of Sombrero tattoos and plenty of Lucha Libre Mask tattoos, none of them had even seen them combined. It’s a rare feeling, but a good one, when you get a tattoo that the often jaded shop guys say it’s a first. It’s a feeling that’s growing on me.

When he was almost done it felt like there was something missing. And there was. So I asked him to put four X’s across the band of the Sombrero. To signify my 40th birthday in a sort of Mexicanized tribute to roman numerals. Once he put those in, it was done. And the rest, as they say, is history. 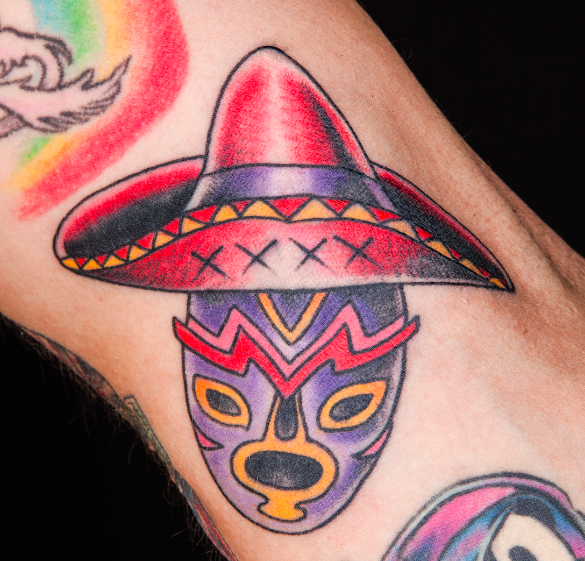 Are you Sancho? No, you are not Sancho!