Every day in October I will be rocking an A To Z Blog Challenge about my terribly terrific tattoos. Every day a new letter. Today is October 19 so the letter of the day is P (I’m taking Sundays off. Columbus Day too!)

P is for Pirate Fish…The Rocks Off Mascot

The Pirate Fish. My first “real” tattoo. Or at least my first sizeable one. The first one was an anhk I got when I was 16. The egyptian symbol of eternal life. I had to go to New Hampshire to get it because tattoos were illegal in Massachusetts at the time. Shit, they were illegal anywhere unless you were 18. And since my fake ID at the time made McLovin’s look like Agent Bourne’s Chilean passport, I struck out at “Tattoo America” and ended up getting needled in a scrap wood shack who’s lone clue as to the services rendered inside was a badly spray-painted sign that said “Tattooze”. That one cost me $40 and all the stale reefer I could pull of of the the underside of the dashboard of my mom’s rusted Volkswagen Rabbit.

When I started my company, Rocks Off, I wanted a signature font design, and a logo, or a sort of graphic mascot. So Glenn Hidalgo created the ROCKS OFF lettering that’s inspired by Iron Maiden. But we still needed the mascot. Eureka moment.

ME: “Glenn – I want a fish, with a mohawk, wearing an eye patch, and throwing the devil horns!”

GLENN: “A fish doesn’t have hands. How can he be throwing the devil horns?”

ME (probably slurring): “You’re the fucking artiste’. You figure it out.”

Figure it out he did

And I figured out that I wanted to get it tattooed on my arm. I wanted it on the inside of my bicep. That’s where I got it. To this day I still haven’t colored it in. Because it fukken HURTS to get tattooed there. And the black and skin version has just kind of grown on me. 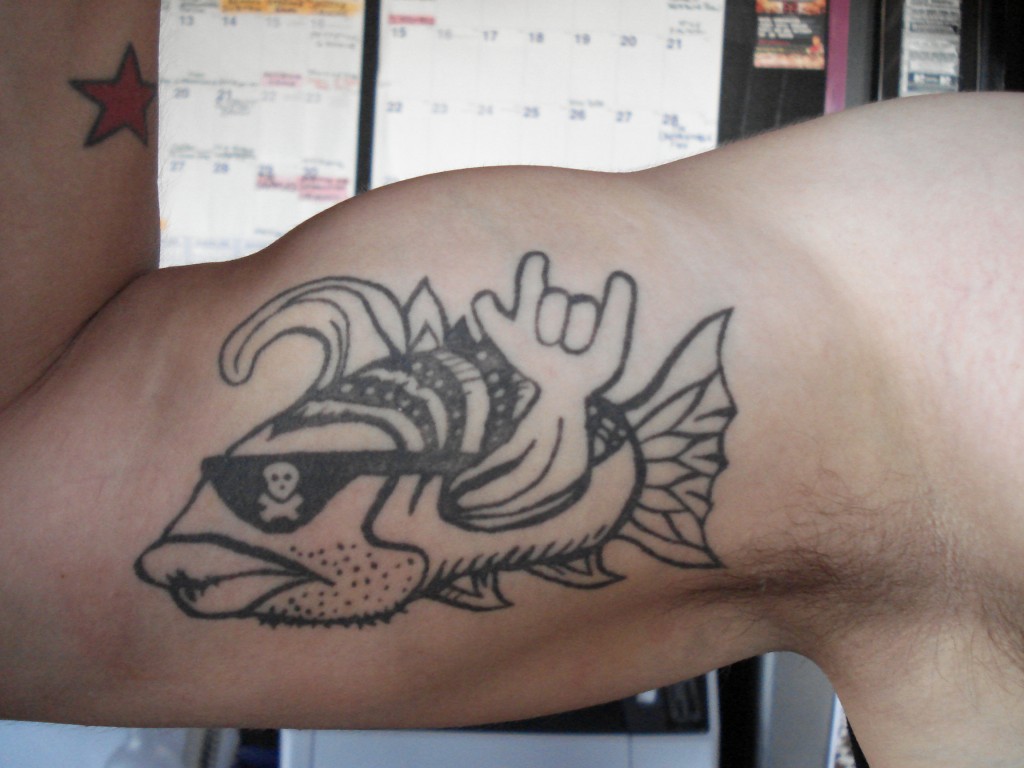 He kind of looks like a “Sancho” to me.

With all the tattoos I have, I still don’t have one on the outside of my bicep. Growing up the outside of the bicep was such a cliched spot. Thats where the white trash renegades got anchors, or dagger-pierced hearts with MOM etched in the middle. I went with the inside. And all these years, and all this ink later I can still sit at the table of a business meeting with my elbows on the table and barely show any ink. For example here’s this pic from an oversized bathtub in Paris a couple years ago… 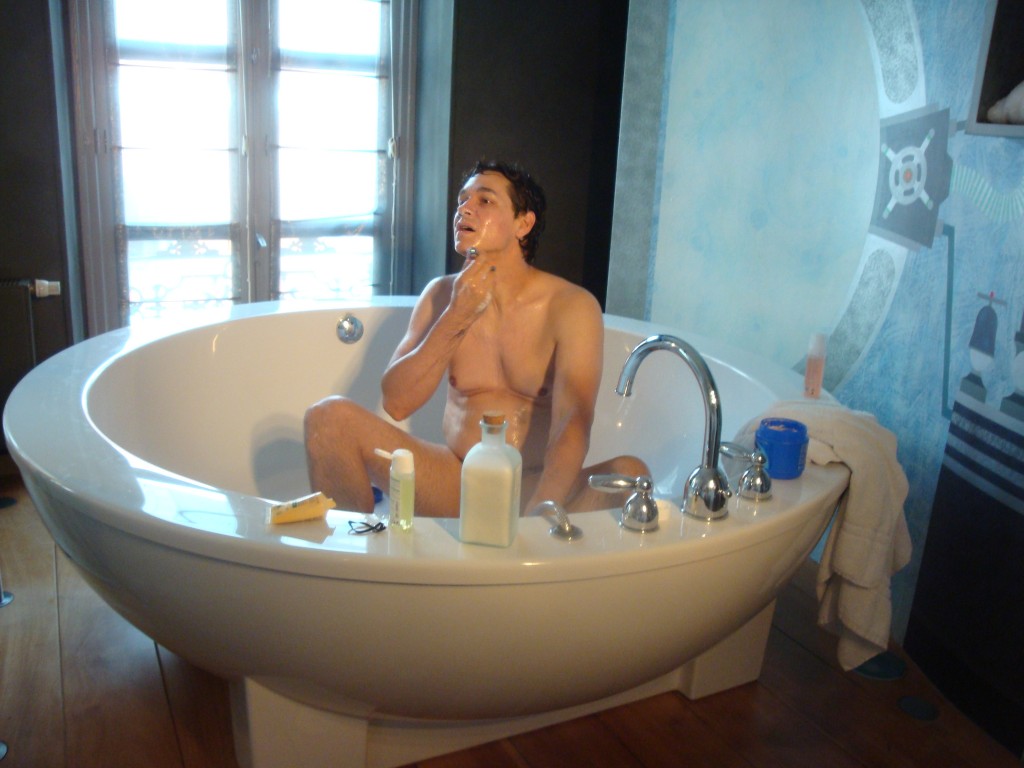 That image has gone on to be the “face” of Rocks Off. It’s been on almost every poster, flyer, t-shirt, and website page we’ve ever made. We’ve even featured it on custom made umbrellas and a run of flasks that had the text “We Drink Like The Fishes”

In 2010 we we celebrated our 10th anniversary of Rocks Off and wanted to do something special. I’ve been known to pull some wacky stunts in the name of PR so for this one I thought “What if we offered people free tattoos in honor of our 10th Anniversary. They could get the pirate fish or the Rocks Off logo. And If they do it they also get 5 pairs of tickets – 10 total – to the shows of their choice that year.”

Sounded like a win-win for me. I figured it would get us a lot of traction in the press and on blogs. But I also though “who in their right mind would do that?” It was a win-win because if nobody got the tattoos, it wouldn’t cost me any money. And if they DID then it would be free publicity for life. The first thing I did was hit up New York Hardcore Tattoos and made a deal with them to do the tattoos. It’s a shop I frequent on the lower east side that was started by Jimmy G of Murphy’s Law and Vinnie Stigma of Agnostic Front and is also now co-owned by Lars Frederiksen of Rancid and the boys at Black N Blue Productions. The day we announced our offer, I thought it would be hilarious and a sort of miracle if even one person took us up on city. Turned out that 13 people did! A couple of couples got matching pirate fish, as did a mother / daughter combo. One guy even asked if he could get the old school animated character Max Headroom tattooed above the Rocks Off logo. I asked why and he said “I’ve always wanted a Max Headroom tattoo but I’m too broke to afford it. So I figure if you are willing to pay for it, I’m cool with having the Rocks Off logo be part of it.” How could I argue with that??

I’m thinking of doing it again for our 15th Anniversary. But maybe this time I’ll include the Dolphin / Unicorn as one of the options. Any takers?? 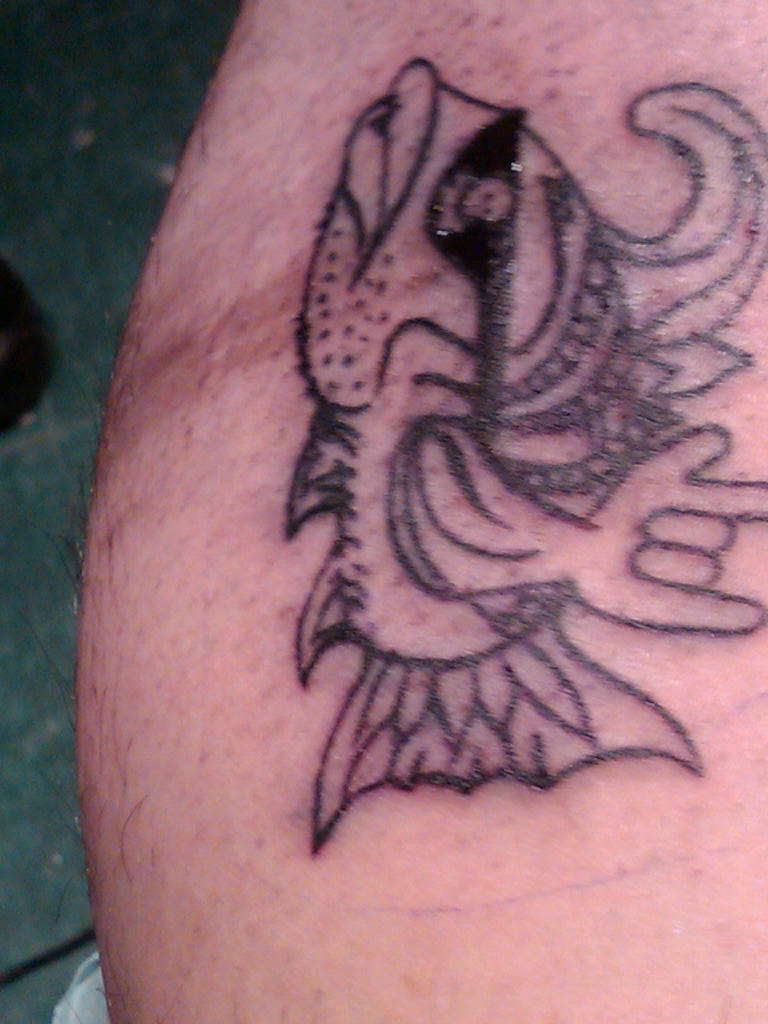 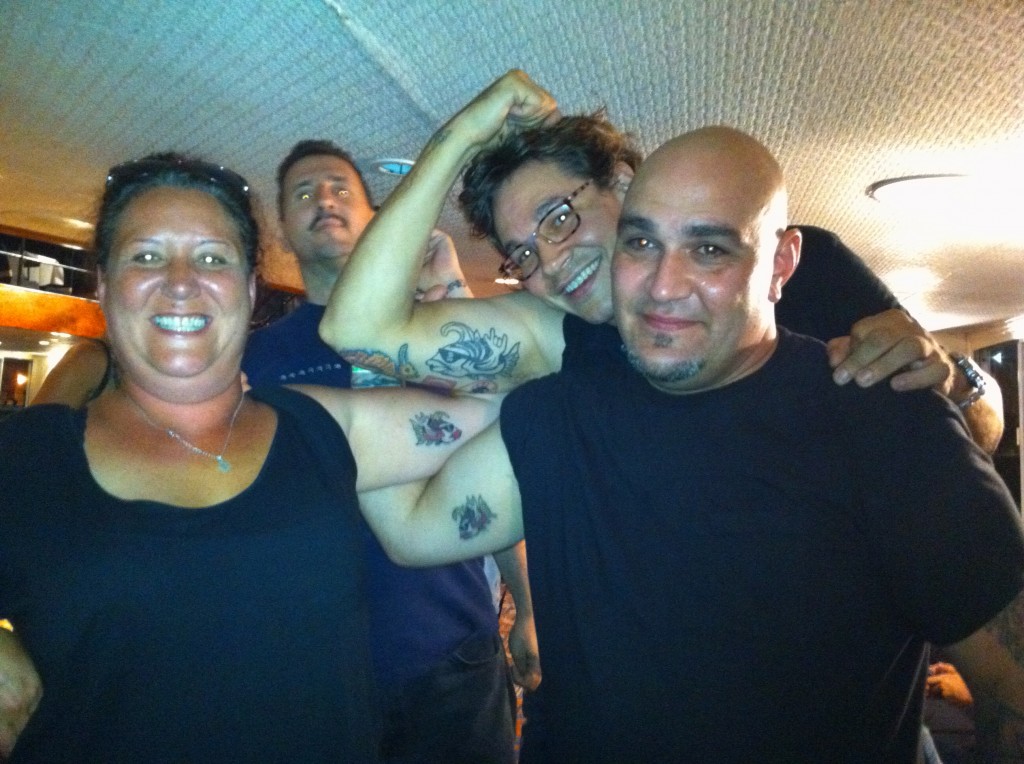 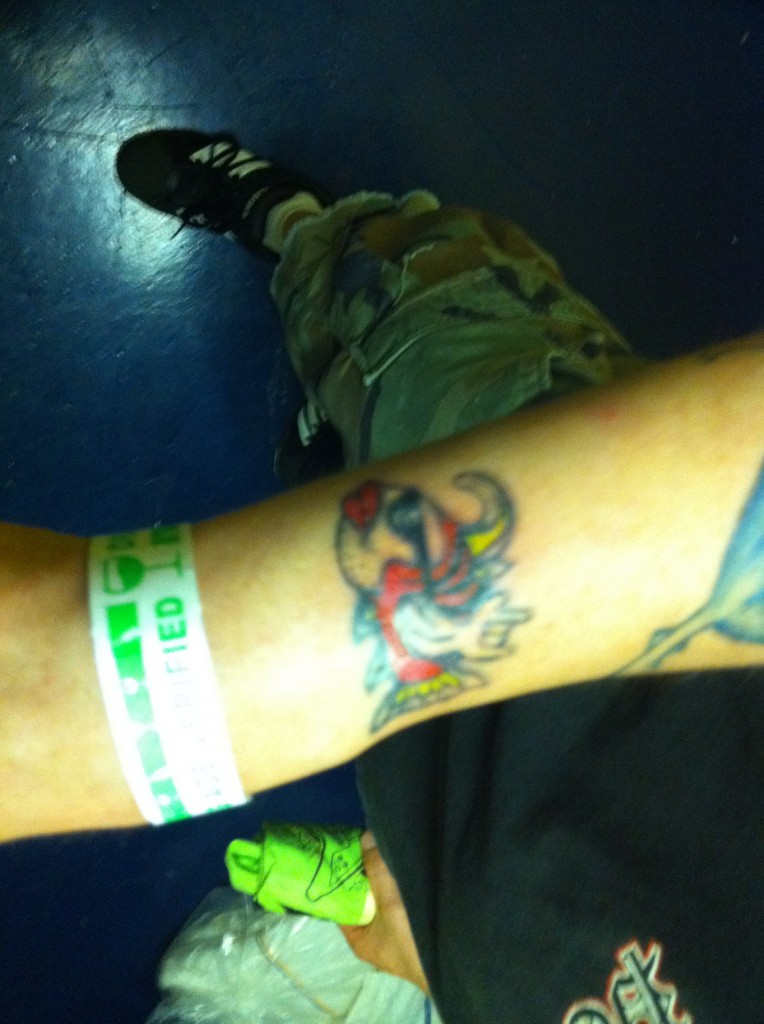 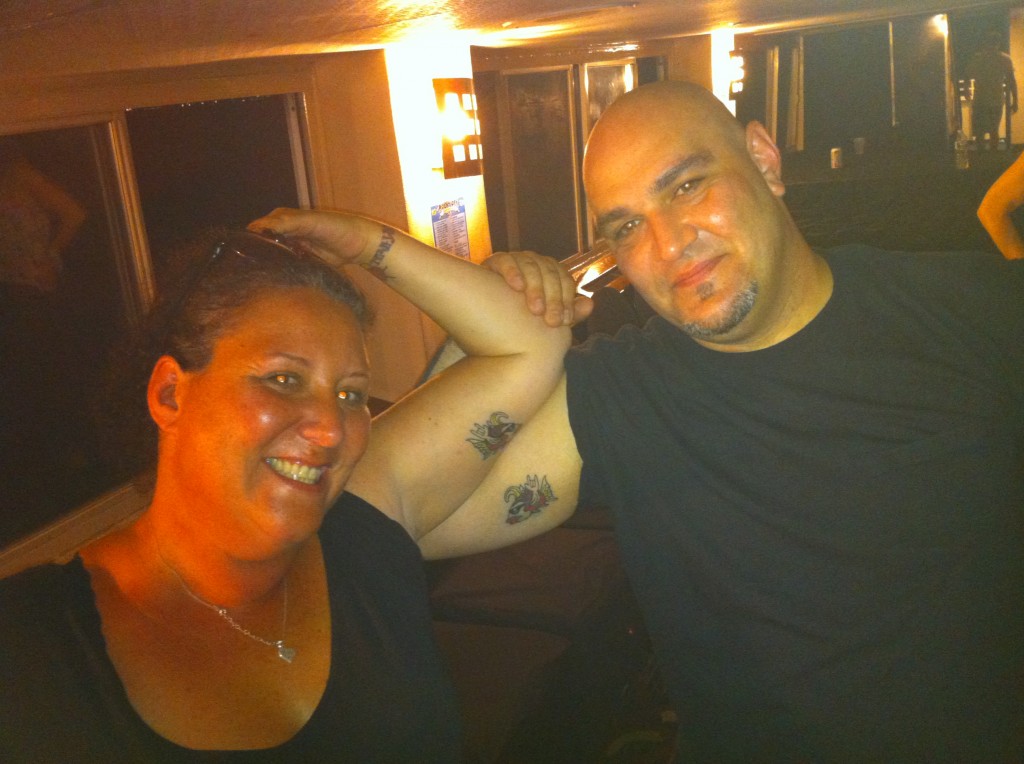 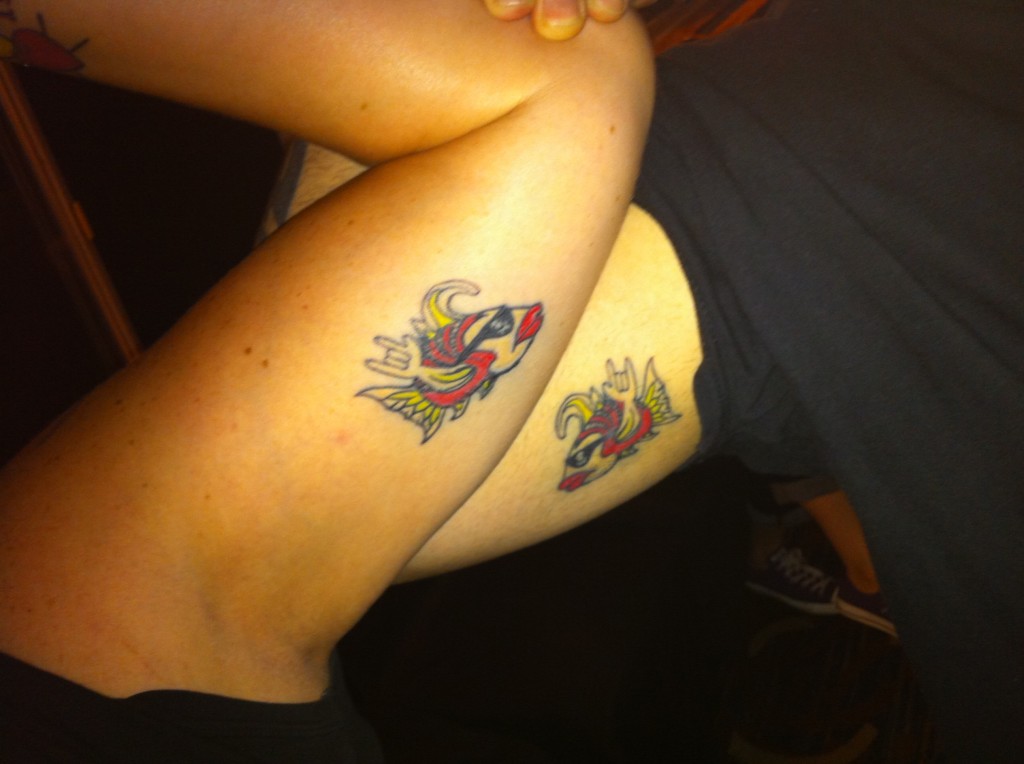 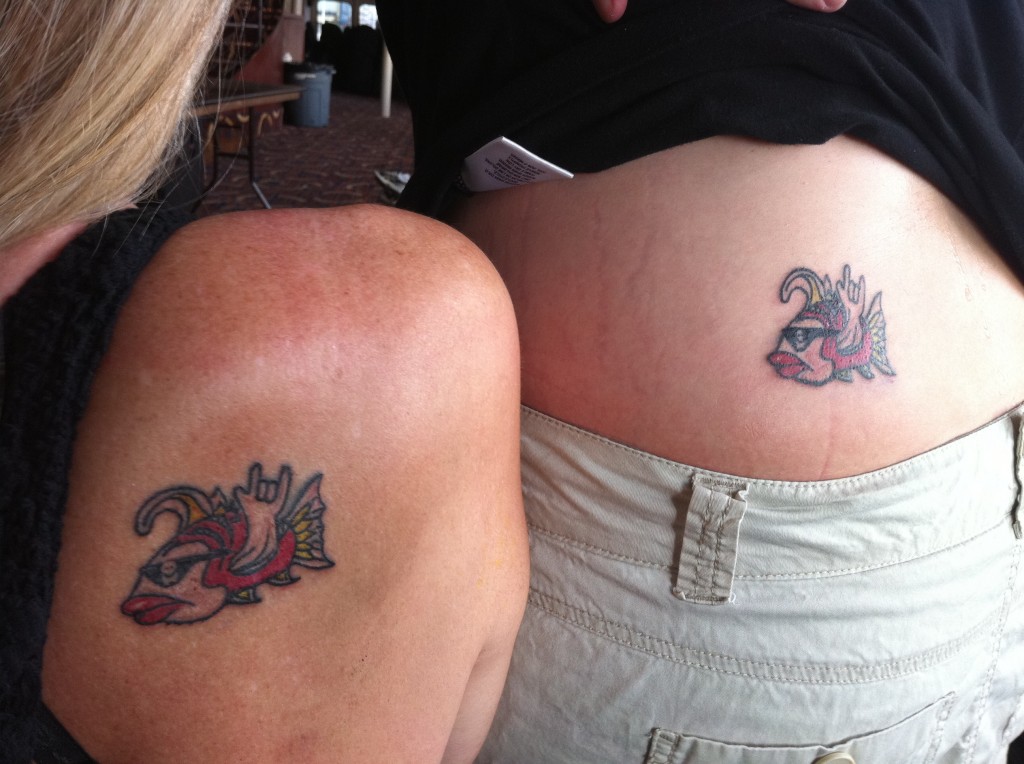 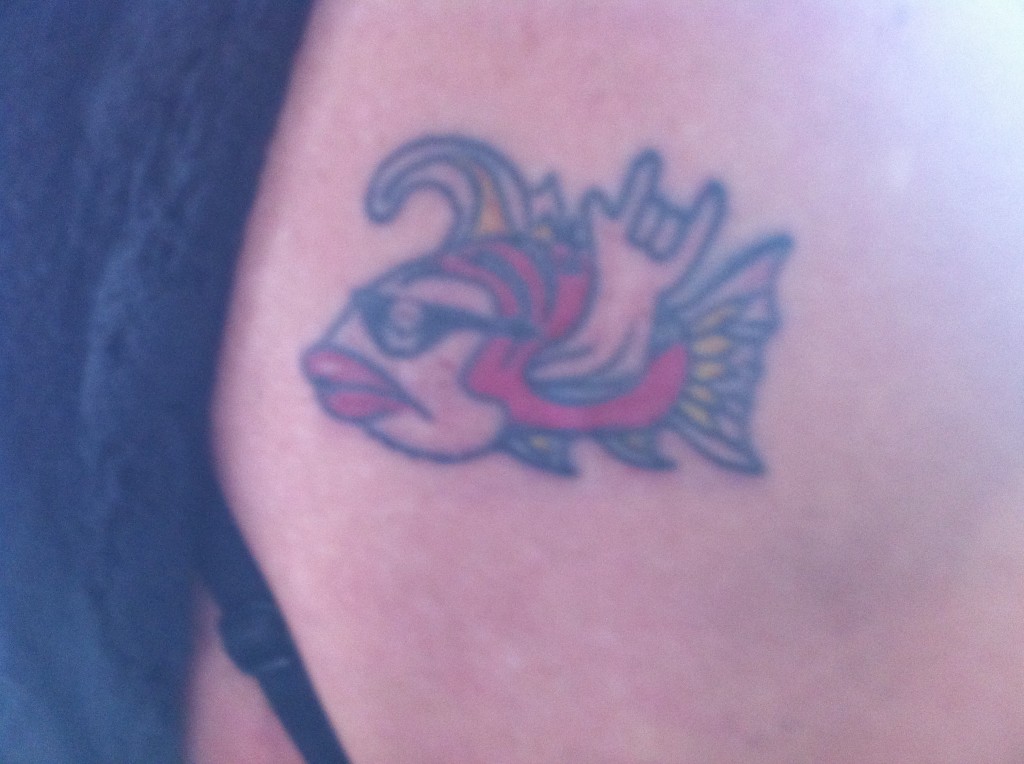 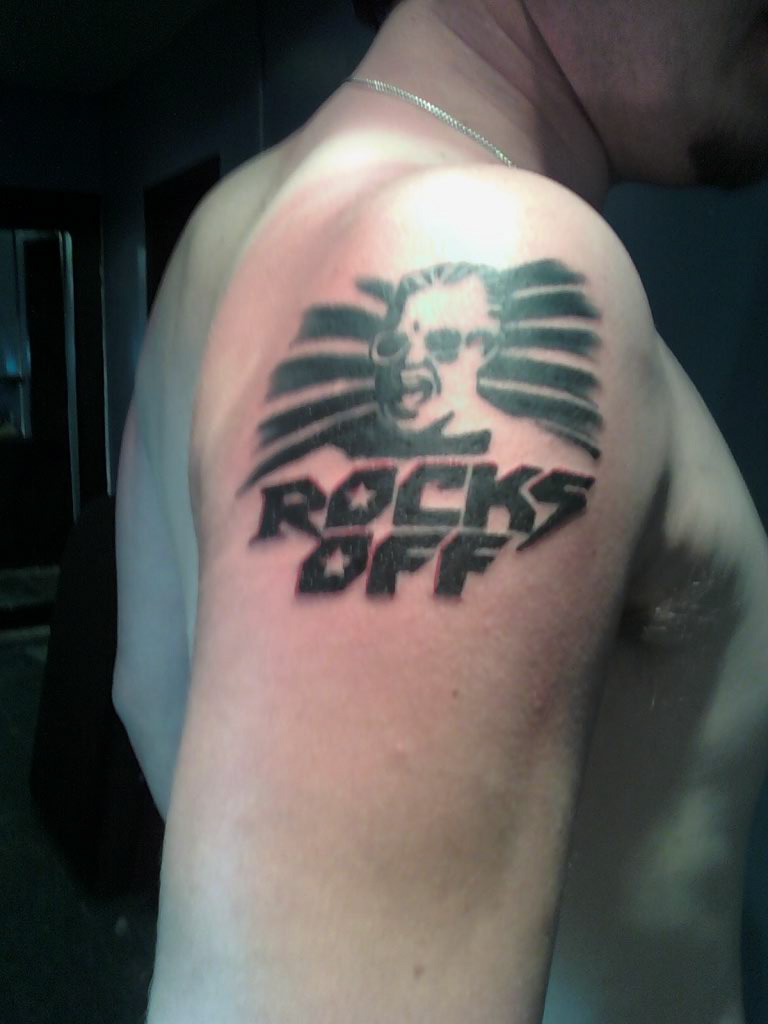