Every day in October I will be rocking an A To Z Blog Challenge about my terribly terrific tattoos. Every day a new letter. Today is October 15 so the letter of the day is L (I’m taking Sundays off. Columbus Day too!)

L is for Larry Bloch.. and Live Your Dash. #LYD.

Larry Bloch is my hero. He gave me my first real job in New York City in 1994. I didn’t know it then, but he also gave me my life. I came to New York with a dream of starting a record label, which I did. Which? Records, RIP. And with the idea that I would have a life in the record business. I’m so glad fate intervened and sent me into the world of concerts. You can’t download a concert… yet.

Larry Bloch founded Wetlands Preserve; one of the most iconic live music clubs in rock n roll history. The Punks had CBGB and the second wave of hippies had Wetlands. It’s where the Spin Doctors and Blues Traveler rose to prominence. And where Phish, The Dave Matthews Band, Widespread Panic, and Hootie And the Blowfish played all their early NYC gigs. But there was good music there too! Sublime, Oasis, Pearl Jam and Rage Against the Machine all played their first NYC gigs there. The Roots played every Sunday night for years. Punk and hardcore shows happened almost every Sunday afternoon. And between 1994 and 2001 I was there almost every day. Larry somehow hired me even though in the interview I told him I wasn’t a fan of the Grateful Dead. I started as his assistant but we quickly became friends. More than friends. He was my friend, my boss, my mentor, and a father figure. When I left college after one fruitless year to move to New York (after a brief stint in Hollywood), my father thought it was the biggest mistake I could make. Him and my mother both came from poor immigrant families and were the first in their families to go to college. So when it became obvious to my dad that I had moved to NYC for good our relationship soured. It wasn’t until I established my own business that we were really able to reconnect.

After he sold Wetlands to Peter Shapiro in 1997 he moved up to Brattleboro, Vermont where he started a retail store called “Save the Corporations” that also housed a community activism center. He served on the board of directors for his local radio station and hosted a weekly music show on the air. He was a well loved character in his community and with good cause.

Larry also loved playing the ponies. He was pretty good at it too. A few years back he hit a trifecta on the Kentucky Derby. A trifecta is picking all 3 horses to win, place, and show. The odds of hitting it are astronomical. His bet was $3,000 and he took home more than a million. Then he promptly gave it all away to his favorite charities. He never bragged about his generosity and he might even bristle at knowing that I’m outing him publicly. But shortly before he passed away he told me that his favorite cashier at the food co-op had mentioned in passing once that it had always been her and her husband’s dream to go to Hawaii but that they were never able to afford it. So he sent them on their trip with his winnings. That’s the kind of guy he was.

After he moved, I would visit him frequently at first, but over time the visits slowed, as they do as time goes on and lives get more complex. But the last time I saw him before he got sick was in New York. We went out for dinner and I finally got to tell him how much of an inspiration he was to me. How I had applied what I learned from him in my own life and to my own business. It was an emotional confession and both of us got choked up. I’m so happy I got to tell him that before he got sick.

Last spring I got a phone call from Larry. It was a short voicemail message that told me to call him back asap. I got a terrible feeling in my stomach and somehow knew what he was going to tell me. I called him back immediately and he confirmed my fears. He had been stricken with Stage 4 Pancreatic Cancer. Serious shit. I made the trip to Vermont to see him a couple of days later. He didn’t look good. At all. But he was in good spirits. As good as could be after getting that sort of news. He told me that just a few weeks before he had been playing the best tennis of his life. And then one day he didn’t feel so hot. Felt worse the next. Then he went to the doctor and they did some tests and the next thing he knew they were predicting his imminent death. But Larry was having none of it. He made a trip to an ‘experimental’ treatment center in Mexico and that bought him about 6 months of good livin’. As good as it can get under those circumstances.

A few months before Larry got sick, my buddy Seth aka the Goon was going through his own private hell. He was in as good of shape as anyone I knew. Long distance runner, boxer, and all around bad ass. One night he had chest pains and felt a shortness of breath. He went to the Emergency Room and the doctor did an exam and sent him home and told him to come back the next day. He never made it past the lobby of his apartment building. He collapsed and luckily the super was there to call an ambulance. He had suffered an aortic aneurism. Basically a piece of his heart exploded. That night he had emergency open heart surgery. We all went to visit him a couple days later and were busting his balls about being weak hearted. He was taking it all in stride, like the champ he is. A few days later while recovering from the surgery he suffered a stroke. He’s still recovering from the stroke, and might be recovering forever. But he hasn’t let it bring him down. He’s still kicking ass and Living His Dash.

LYD – Live Your Dash. A couple weeks before Seth’s heart hiccups, me and Seth and a crew of goons had movie night. We went to see “Into The Abyss” a Werner Herzog documentary about a couple of white trash scumbags in Texas who committed a triple homicide. We had to laugh to keep from crying during the film, but one part stuck with us all long after the movie was done.

It was the part where Herzog was interviewing the lead executioner from the State of Texas. This was the last man you saw if you were a bad bad man. He would collect you from your cell, strap you down on the table, and administer the lethal injection. In the film he talks about how after well over 100 executions, one day he broke down and decided he could never do another. He quit that day. Even though the state told him he would lose his pension if he quit. He just couldn’t take another life. He said he had to live his dash. He explained that when you die, your tombstone has two dates on it. The day you were born, and they day you die. And that little dash in between represents the rest of your life, and what you did with it. Live Your Dash.

In the days after the movie we were all texting and tweeting each other and using the hashtag #LYD. It was funny. And fun. Then we all went and got LYD tattoos from Luke, who not only designed the tattoo, but is a founding member of team LYD.

About a week after we got the tattoos is when Seth fell ill. When the team at the hospital tried to give him an IV, they had a hard time finding a vein. When they finally got it to stick, they had placed the needle right in the center of Seth’s LYD tattoo. Coincidence? Hmmmmm.

I love my little LYD and PMA (Positive Mental Attitude) tattoos. They are important to me, and how I live my life. I wanted to incorporate them into a bigger piece. So I asked Luke Wessman to draw up a piece for my ribs that would incorporate PMA, LYD, 161 (for the address of Wetlands – 161 Hudson Street), and one of Luke’s signature skeletons riding one of those old-school penny farthing bicycles. The penny farthing was a nod to the old British TV show the Prisoner which Larry turned me on to. Larry never got to see the tattoo but he did see Luke’s completed drawing the last time I saw him. I love and miss you Number 6. Be seeing you! 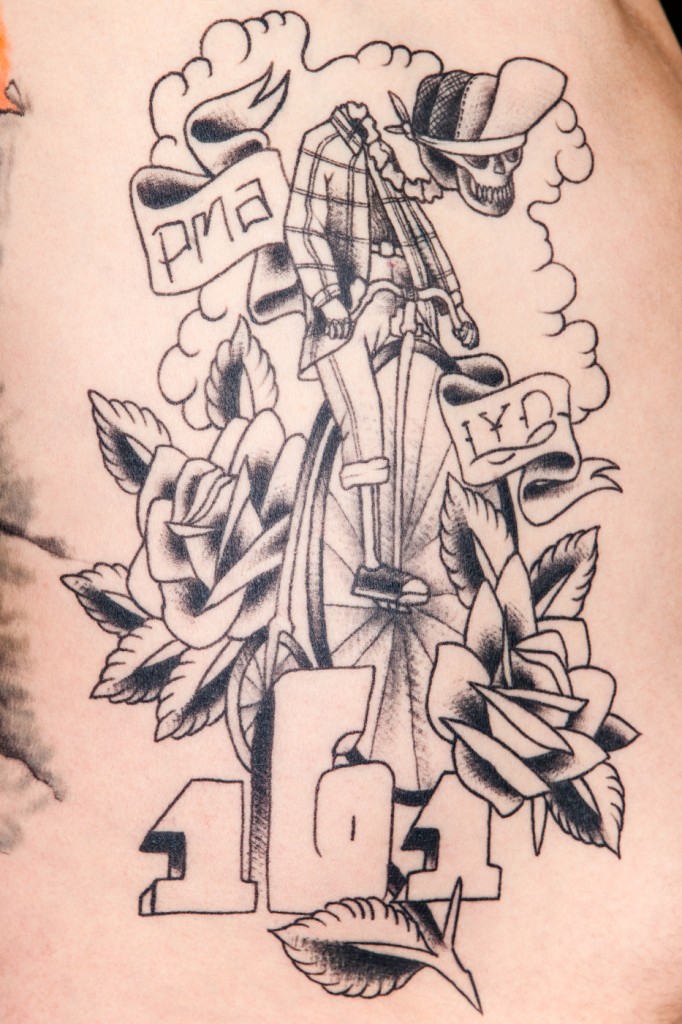 The ribs. The ouchiest spot for a tattoo.

Here are some thoughts I shared about Larry at his memorial service last year.

And the trailer for Wetlands Preserved – the Movie!