Every day in October I will be rocking an A To Z Blog Challenge about my terribly terrific tattoos. Every day a new letter. Today is October 4 so the letter of the day is D.

D is for Dollywood.

Oh Dollywood. A few years back me and my buddy Ginger and some other friends were at the Rodeo Bar in NYC at 2am on a Sunday night, eating nachos, and drinking beer, as you do at the Rodeo Bar. When a Dolly Parton song came on the conversation quickly turned to how much we all loved her and then on to her theme park Dollywood. If you can’t embrace spontanaiety what’s the point of even being alive?

So of course that Thursday 6 of us were on a plane to Nashville for our pilgrimage to our theme park and music mecca. We hopped into a rented minivan and made our way to our rented house in the smoky mountains. On the way we stopped at a liquor store and picked up enough booze to kill a small army. Or to fuel our insane posse. We also hit a grocery store. And bought some food. As if… you find funny things though in rural Tennessee grocery stores. We bought some Pancake Sausages – On A Stick! It was pretty much the breakfast version of a Corn Dog. 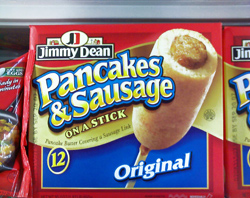 This is why you’re fat.

Dollywood is a helluva place. We had no idea what to expect but it blew us all away. We knew it would have some rides but who coulda guessed that there would be six or seven different world class coasters. But somehow they didn’t dominate the park. The place is massive but laid out in such a way that it feels like a series of quaint little villages. And every village had its own little music venue / chapel. And chapel can’t be overstated enough! You never feel more than a whisper away from God while you’re there. Family friendly is an understatement. Before we made the trip, Jessica found this on the FAQ part of the DollyWood website “Clothing with distracting words and/or pictures will not be permitted inside the park.” So I packed my Dolphin / Unicorn T-Shirt. That one never got us in any trouble. But a number of our photos from the Roller Coaster cams were flagged and deleted before we every got to see them. Something about “rude hand gestures. I guess the shocker still qualifies as shocking in Pigeon Forge!

This whole trip could be a book in it’s own right – or a series of blog posts. In fact part of it was alredy immortalized in my last A to Z blog in the post H is For Hot Tubs.

But I can’t NOT mention the Cowboy Church. We knew we wanted to hit up a church while we were in the bible belt. But we never imagined we would find a Cowboy Church. A local hipped us to it – and it was the best church ever. It took place on Sunday morning at a theater in Pigeon Forge. It was a live country and western band playing gospel themed songs and the preacher played lead guitar and sang. They played a handful of songs and then he did his sermon. But that’s when the fun really began. At the end of his sermon he said “This is when the service would usually end, but today we have a special surprise. We are going to have a wedding! Just give us a few minutes to get set up for that and we will be right back – and the curtained closed on the stage. When it re-opened not much had changed but there were three giant vases on a table. After the pomp of circumstance of the bride’s entrance they got down to the ceremony, which was unremarkable until they got to the vases. One vase was filled with red marbles and one was filled with blue. The preacher explained that the red marbles represented men, who are from Mars. And the blue marbles represented women who were from Venus. He then had the couple each pick up a vase and at the same time pour them into the third vase, so they mixed together, thus representing their union. We started drinking pretty early that morning, and continued to sip whiskery throughout the service, but I SWEAR ON THE GRAVE OF JACK DANIELS THAT THIS REALLY HAPPENED. The only right way to cap that trip of was to get a Dolly tattoo. Ginger got one too. 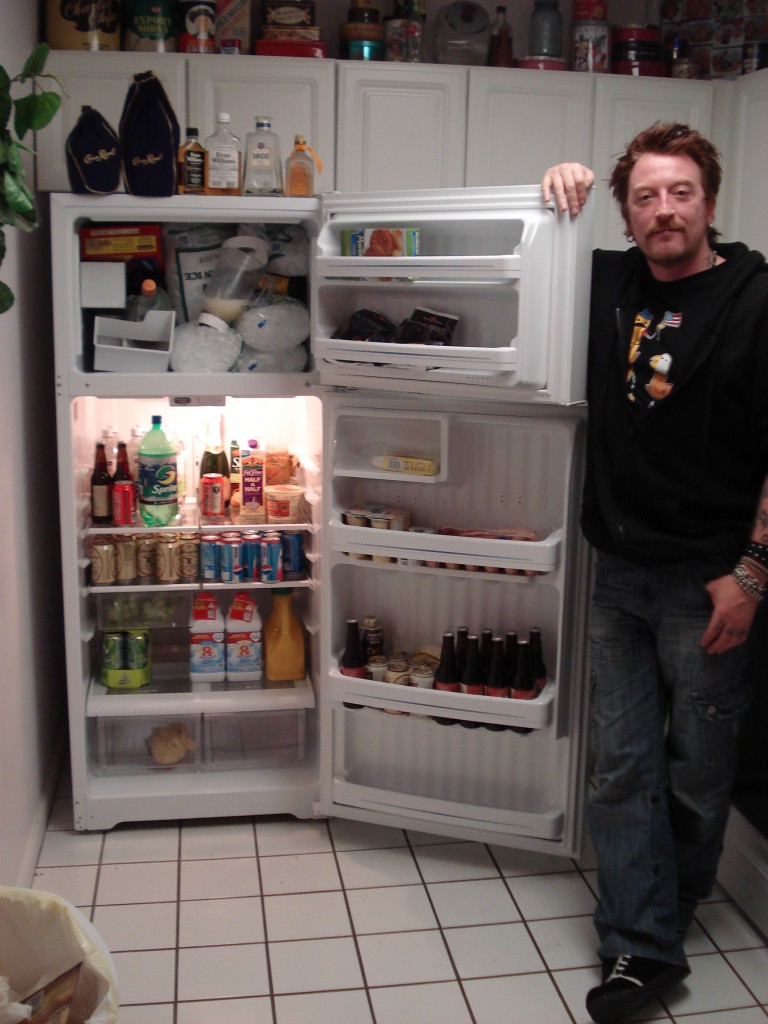 Ginger with our stockpile. 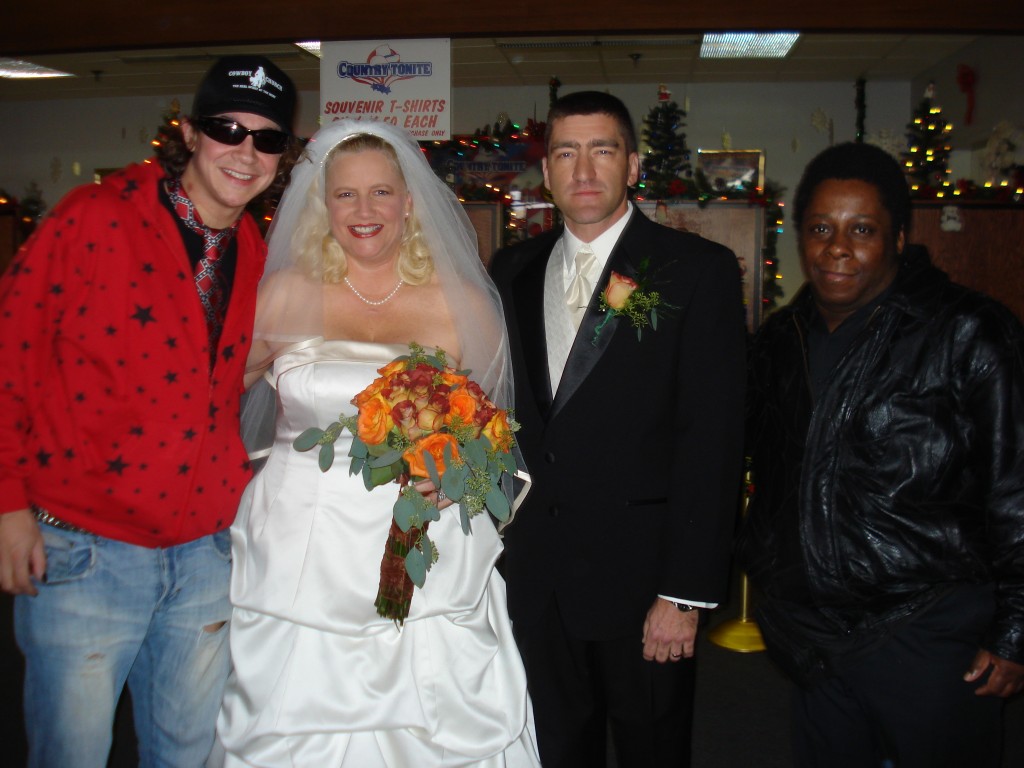 Me and Rodney and the lucky couple! 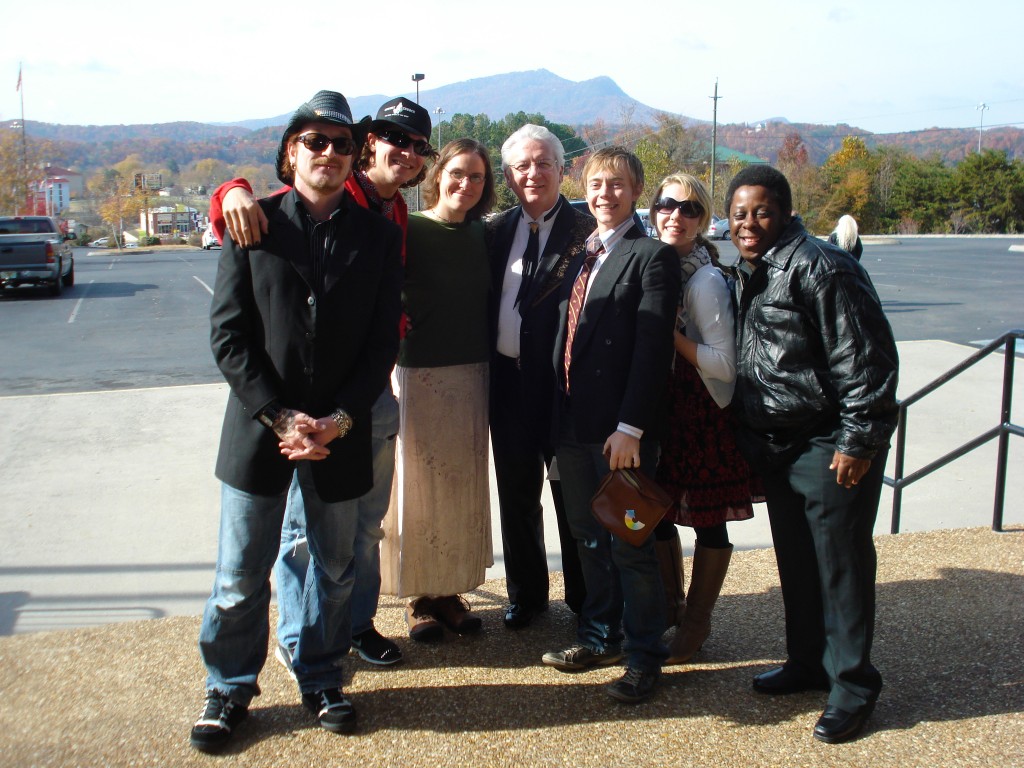 Our whole crew with the Minister. I asked him where he got his amazing suit. He said “Down the street at the Suits and Boots Wearhouse.” I went and bought the exact same one and have performed a wedding in it last summer!