Every day in October I will be rocking an A To Z Blog Challenge about my terribly terrific tattoos. Every day a new letter. Today is October 3 so the letter of the day is C.

Even though the cupcake minister is one of my favorite tattoos it has a pretty simple, yet convoluted, backstory. I was sitting on a plane that was about to take me away to Tucson, Arizona to visit The Magic Fun Store. Before we took off I posted to Facebook “Headed to my tattoo shop in Tucson, can’t decide what to get. Any ideas?” I got a lot of zany responses, naturally, but the one came through from my friend Kathy Teree just before I had to shut my phone down really resonated with me. She wrote, quite simply, “Get a cupcake!”

It was a long flight, which gave my mind plenty of time to wander. I had just seen a comedian named Michael Che make a joke about cupcakes being played out. He said “My neighborhood is becoming gentrified. You know what gentrification means? It’s when a buncha white people move to a fucked up neighborhood and open cupcake shops.” I knew I had to come up with a twist. Somehow my brain started wandering to ministers and I made the connection that they had a lot in common with cupcakes. A good minister has a sweet and sugary delivery, and makes you feel good about yourself after his sermon. But ultimately, because of his chosen path, he’s gonna let you down. He has to. Because the overwhelmingly majority of the time he’ll be telling you that your life is in the hands of an imaginary entity. Sort of like a cupcake. They usually look pretty in the glass case and and put a big smile on your face when you bite into the frosting. But soon you will crash. Cuz it’s made up of shit that’s ultimately no good for you. Refined sugar. Processed flour. Stuff that’s gonna eat your body away from the inside. It made perfect sense to me then, and makes perfect sense to me now.

Now I’m not saying every cupcake and every minster is full of shit. Babycakes Bakery in NYC makes a pretty sweet vegan cupcake that’s sweetened with agave. And my buddy Joel Osteen is a fascinating orator who I’d liken more to a motivational speaker than a traditional minister. But most of the time, both cupcakes and ministers are ultimately just a large sack of shit wrapped up in a pretty package.

When I finally arrived in Tucson and saw Bruce, the idea was fully formed and being an intelligent man with no trust of organized religion and a finely tuned bullshit sensor he of course loved it. I gave him a few points of reference – I wanted the face of the cupcake to recall the old Milk and Cheese comic book characters. They were a gin guzzling violent dairy duo. A Carton of Hate and a Wedge of Spite. And I wanted to gun to be an AR-15 assault rifle, because that’s what assholes typically use to kill loads of people in America. IT was Bruce’s great idea to add a little discarded Candy Heart by the minister’s feet that says “U Lied” 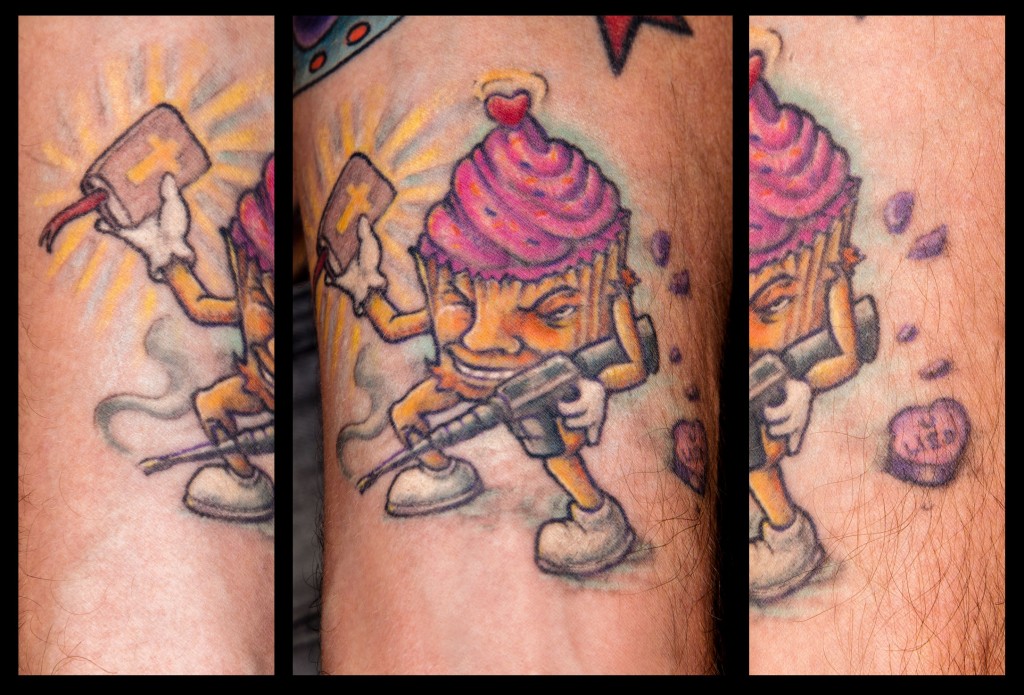 And just like that, the cupcake let people know he was NOT to be eaten. 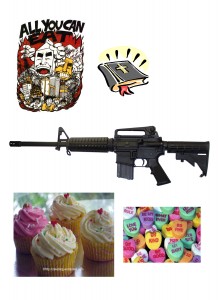