Every day in April I will be participating in the A to Z Blog Challenge.  Each day I will write a post dealing with an issue that is near and dear to me that starts with the letter of the Alphabet the corresponds with the day of the month.  Neat right?  Today is April 4th so the letter of the day is D.

D is for David Allan Coe

The Longhaired Red Neck Rock N Roll Son Of The South.  Ever since I started booking the Wetlands – my dream booking was the outlaw country artist David Allan Coe.  Year in and year out I would call his crazy booking agent who would tell me over and over again that David would NOT come to New York City.  Said he had a semi truck for his gear and a huge tour bus and just was flat out not interested in bringing those vehicle to New York City cuz traffic and parking were just such a nightmare.

When I started booking shows at BB King’s in Time Square I called his agent and said “Hey what if I put David up at a hotel in Jersey and send a car service for him and his band – he won’t need to take the tour bus into the city but the equipment truck will need to drive in…”  His agent was like “No way.  David ain’t coming into the city.”  Then I got an idea to do try to have DAC play on a boat.  I did a little research about this crazy idea of mine and then called the agent and said “Hey man – I have an idea.  We do shows on this boat that holds 500 people – it’s called the Temptress.  The boat is docked at 41st street and the west side highway.  About 1,000 yards West of that – just across the Hudson River is New Jersey.  There is a dock there and plenty of parking.  Im thinking we can pul the boat across to New Jersey and you guys can park your bus and truck there, we can load you on the boat, take it back across to Manhattan, load the customers, do the cruise, let everyone off in Manhattan and then take the boat back to Jersey to unloadDavid and the band and all his gear.  What do you think?”

He said “So lemme get this straight – David will never actually have to set foot in New York City…?” and I said “YUP!”  He called David and called me back and said “You got yourself a deal, buddy”  I was SO excited!!!  We made up posters that said “1st NYC show for David Allan Coe in 32 years!” and started hanging them everywhere.  The show sold out pretty quickly and I was pretty proud of myself for making this happen.  A few weeks later I ran into Stef Scamardo who is married to and manages Warren Haynes.  Warren used to play guitar in David’s band.  I told her the whole story, and how excited I was.  She said “You know why David hasn’t played in NYC in all this time, right??  I said “Yeah, he just has this weird thing about not wanting to bring his vehicles into NYC!”  She just laughed and said “Hahaha, no you silly goose – it’s because David used to be the President of the Outlaws Motorcycle Gang in Nashville and they had some major beef with the Hells Angels 30 years ago and they made a pact – as long as the Outlaws never came to NYC then the Angels would stay out of Nashville and they would agree not to kill each other!!!”

Well I almost shit my pants.  For weeks I was having nightmares about the show.  Thinking that the Hell’s Angels were gonna come tearing down the pier on their motorcycles and get all “rape and pillage” style on us.  The night of the show everything went mad smooth and David played a great show without incident.  I breathed a huge sigh of relief and counted my blessings… and my money.  A few weeks later I saw Steve Bonge who is the president of the Hell’s Angels NYC Chapter.  on the street in the East Village, not far from the Hell’s Angels NYC HQ. Most sane people cross the street to AVOID a Hells Angel.  I crossed the street to CONFRONT him.  I had met him a buncha times when I used to work at a club called Coney Island High that he frequented on St Marks Place.  I approached him and introduced myself and told him the whole story and apologized and told him I meant no disrespect to the Hell’s Angels and all that.  He just laughed and said “Man that was like thirty years ago – whatever that was about is long forgotten.  It’s all good!”  Then I bought a motorcycle. 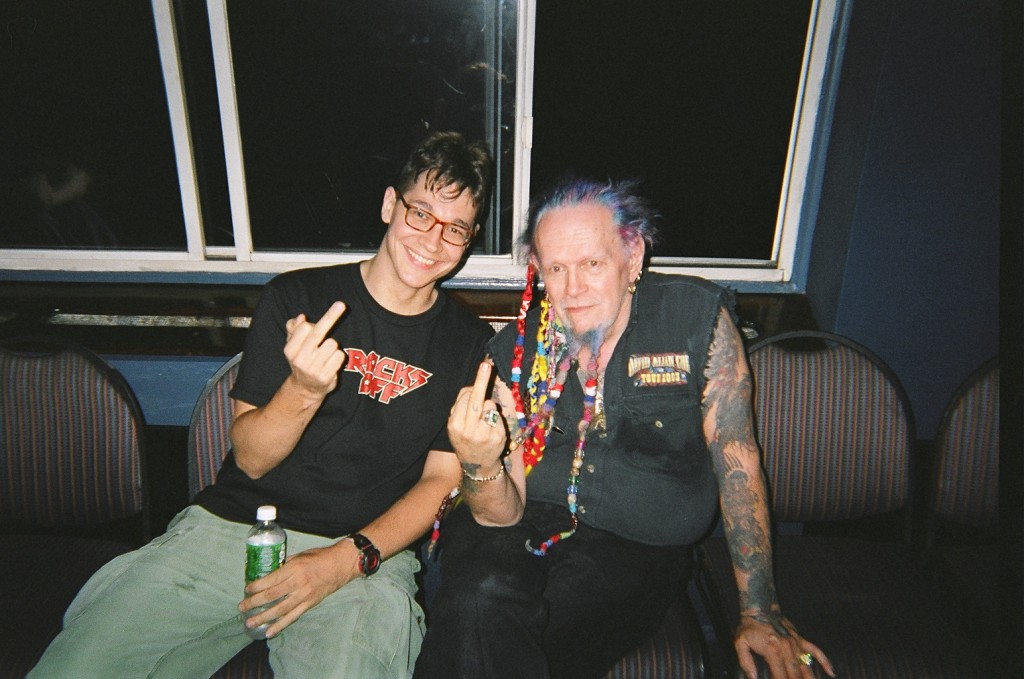 Letting You Know How They Really Feel