Today I went caving for the 2nd time. Is that a verb? It is now, I guess. The first was a few days back in Chiang Dao. At the time I thought it was pretty cool. Went for a 45 minute loop in a cave with a guide who had a hand-crank powered lantern. We went into what I thought was deep in the side of this mountain – and had a few spots where I had to use my recently honed yoga skills to squeeze through some rocks. But that was nothing compared to what I got into today.

NOTHING like the one I did in Chiang Dao. But I’m so glad I went to the one there because now I know the difference between jabronis hopping off of a tour bus and waking right into a cave and what happened today. Im staying at a place called Cave Lodge which is about 20 bamboo huts nestled on a hillside by a river with a communal lodge full of hammocks and people who are over here in Asia for a LOT longer than me. Of all the weirdos I talked to over the past two days here, my 3 week trip is by far the shortest. Followed by a couple of Canadians who are here for 5 weeks then everyone else I’ve meet is here for spans of 3 to 8 MONTHS. And the odd part is the people who are traveling the longest are by far the oldest. We’re not talking fresh faced gap year travelers. Full grown adults that should ostensibly have JOBS and shit. That’s just bananas. God bless these weirdos.

I thought I had gotten enough of the caving vibe. What I saw in Chiang Dao felt like plenty. OK – I went to a cave. Wheeee. That was cool. Cool enough. So when I got to this place I realized it existed to be a jumping off point for all sorts of adventure treks which were marked by handwritten signs on the walls of the lodge. I signed up to go on a 20KM white water kayaking ride. Given my over the top love for tubing on the Esopus Creek during water release weekend this seemed perfect. However, this twisted Asian universe had other plans for me. When I woke up this morning the crazy Aussie owner here, John Spies, told me they didn’t have enough people signed up for the kayaking trip but instead suggested the “Long Snake Cave” excursion. This guy has literally written the book about caving in the Thai / Burma border so I took his advice. I read the description on the wall that said “Involves some LOW sections, but most is easy small stream passage.” Sounded good enough to me. How hard could *some* low sections be? In Chiang Dao I got so low at one point I even had to put my knee down. And there wasn’t even a stream there. So I said “Screw it. Let’s do it!”

Seven of us piled into the back of a pickup truck for an hour long ride up a steep and winding mountain pass then down a janky ass dirt road for a couple of MILES. Then we got out and hiked down the side of a super steep mountain and then through enough brush for an epic game and hide and never be found. It was wild before we even got to the cave. I don’t have any idea how anyone ever found this cave. My only thought is that some hungry local was chasing down a wounded animal during a hunt and tracked it to the cave where it must have gone to seek shelter. It was THAT secluded..

It took us FOUR HOURS to go through the cave. 7 kilometers – which is about 4 miles. That means we averaged ONE MILE AN HOUR. The sign back at the lodge said “Some low spots but most is easy shallow stream passage”

It should have said “When you get to the first stream, don’t bother trying to jump over it to keep your feet dry, because in about two minutes both of your feet are going to be soaked and they will remain that way for the rest of the day. Oh, and those few low spots we warned you about? What we mean by “low” is that you’re gonna have to get down on your knees and forearms and slither on your belly to make it through these passages. And then at some spots you’re even going to need to exhale while you shimmy forward just to fit between these distorted twists of earthen shrapnel. Sound good? Cool. Let’s get going!”

Ok, so there was that. Then I also should have asked “What are these helmets for? Is there a danger of rocks falling from the ceiling of the cave?” To which they would have said “Ahhhhhh, no such luck sucka the cave is in no danger of collapsing! C’mon man, it’s been here for millions of years. We gave you a helmet because there are a TON of low hanging rock formations and stalactites all over the place. And even though we gave you a headlamp you are going to be SO FOCUSED on keeping your footing and not slipping on any one of these millions of rocks or patches of mud that you won’t possibly be able to look in front of your FACE at the same time!!!”

I must have needed that helmet a good dozen times. (How many medium head traumas does it take to equal one concussion? Let’s find out!) And I’m traveling LIGHT man. Just a small backpack for 3 weeks. So I did NOT have cave shoes. I was wearing my camoflage Nike Roches which have ZERO traction. Completely flat soles – whoops. That meant I was constantly doing the Paul Simon crackhead dance all over the place, just slip slidin’ away! I almost ate shit more times than I could keep count but somehow I managed to stay upright throughout the whole thing. Except for when, you know, I was crawling on my hands and knees. I also have abundance of little scratches and nicks on my knees and legs from all the crawling, and God knows how much bat shit gets spilled into that water, so I’ll be curious to see if I end up with any sort of infection. Though it was a fresh stream so maybe the water is mad clean. We will see. Surely, we will see. Send Lawyers Guns and Antibiotics.

This went on for hours. As I said before HOURS. 4 hours inside of this hellhole. At one point we found a hole that just kept going down, down, down like 80s era Bruce Springsteen. Our guide – who cannot be named because he didn’t even speak enough English to facilitate an introduction, threw a rock down in the hole (yeah I’m making an Alice in Chains reference as well as a Boss reference in the same paragraph. WHATS UP, NINJA?!?!?) we waited for it to hit the bottom and then waited some more. Finally we heard a THUD. Our guide just laughed maniacally and skipped around the hole on the thinnest stretch of slippery mud covered rock and didn’t look back, leaving the rest of us to go our own way (FLEETWOOD MAC too – BOOOOOOOOOM!). How low did that hole go??? I’m guessing that if I had had a rope and a trusty point to secure it to I probably could have rapelled down inside and gotten to shake hands with the devil. Again.

That was about the halfway point and not long after we found ourselves at the spot we had stopped for “lunch” which consisted of two plastic bags – one filled with white rice and another filled with some curry that may or may not have been sent to do serious damage to my intestines. I’m still waiting on the verdict there.

Well at least now we were heading back. You know how sometimes when you go somewhere new the return trip seems to be a lot shorter because you’ve already experienced the new-ness and so the familiarity makes time pass quicker? Well I wondered aloud if that was going to happen with this trip and I soon had my answer. Our guide was obviously not paid by the hour as he set off like his feet were on fire and his ass was catching. This led to a lot more of that crackhead dancing as well as my only bonafide moment of abject terror.

We still had to make one epically wild and crazy climb up some slippery ass rocks. Which would have been fine, if I could have just slid back to the bottom if my attempt was (likely) unsuccessful. Except this was a climb over a deep crevasse where if I failed I was likely going to be in Aron Ralston territory and would need to saw off one of my own limbs to get free. My fear was quickly compounded by the fact that I was the last guy in the formation at this point and I had to watch all 6 of the folks in front of me roughly struggle to make it. My head started to go into panic mode which I knew wasn’t going to help, and in fact only make it worse, and was compounded yet again by my tacit knowledge hat my shoes had less traction than a narc at a biker rally. PMA though, right?

With a bunch short bursting breaths, instead of the confidence of one deep one, I went at it and was looking for footing and flailing and panting and hustling and praying my way up that shit. I finally made it, of course, or you wouldn’t be reading this, but then was told afterwards, by a guy in the group who had told me he was an avid rock climber (and even HE had a hard time with this section) that when I finally made it up to the solid rock face which was the end of the ascent, that I had perfectly executed a move that they refer to in rock climbing circles as “the beached whale” just splaying my whole body against the rock in an attempt at having one continuous point of contact. Fuck it. I didn’t care. I was so fucking scared at that point that if I had found the properly sized hole in the rock face and could have somehow gotten a boner then I would have, in the interest of keeping myself out of that crevasse, tried to fuck it!

After a lot more walking and splashing and slip sliding I finally saw daylight in the distance. And I finally understood how excited those miners must’ve been. Ya know, the ones that the Brothers Gibb so eloquently wrote and sang about in New York Mining Disaster 1941.

Caving. What a fuckin’ TRIP. Next time I’ll pass, thankyouverymuch.

Epilogue – Back at the Lodge:

Someone just asked me “How was your day in the caves?” And I said “It was GREAT! I spent half the day slithering on my belly like some low down dirty crackhead looking for that last piece of rock hiding in the nether regions of a stinky shag carpet!” 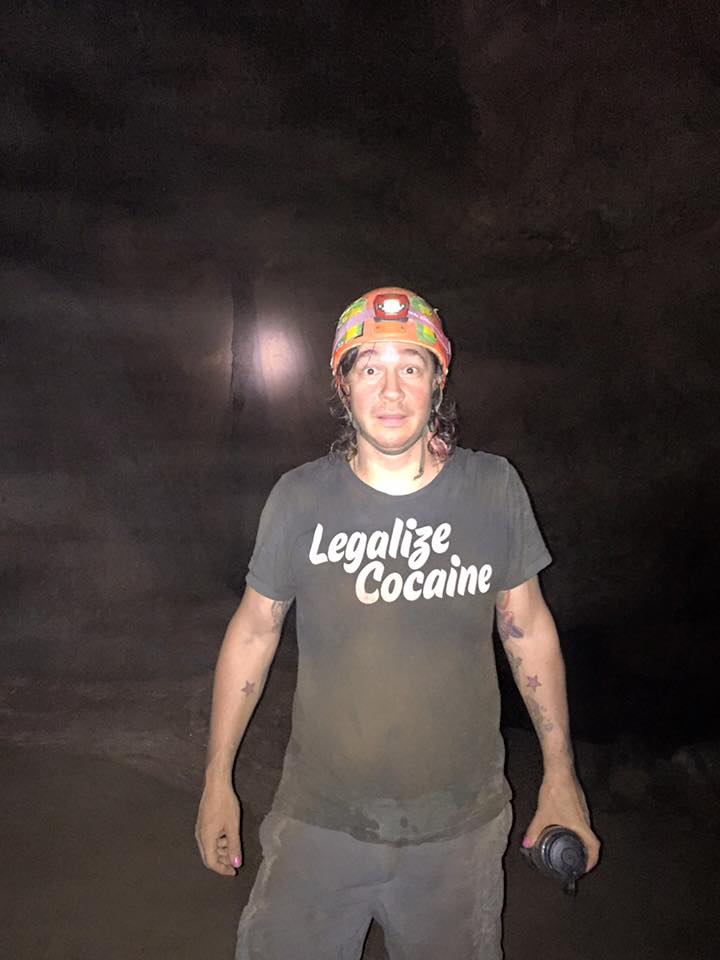 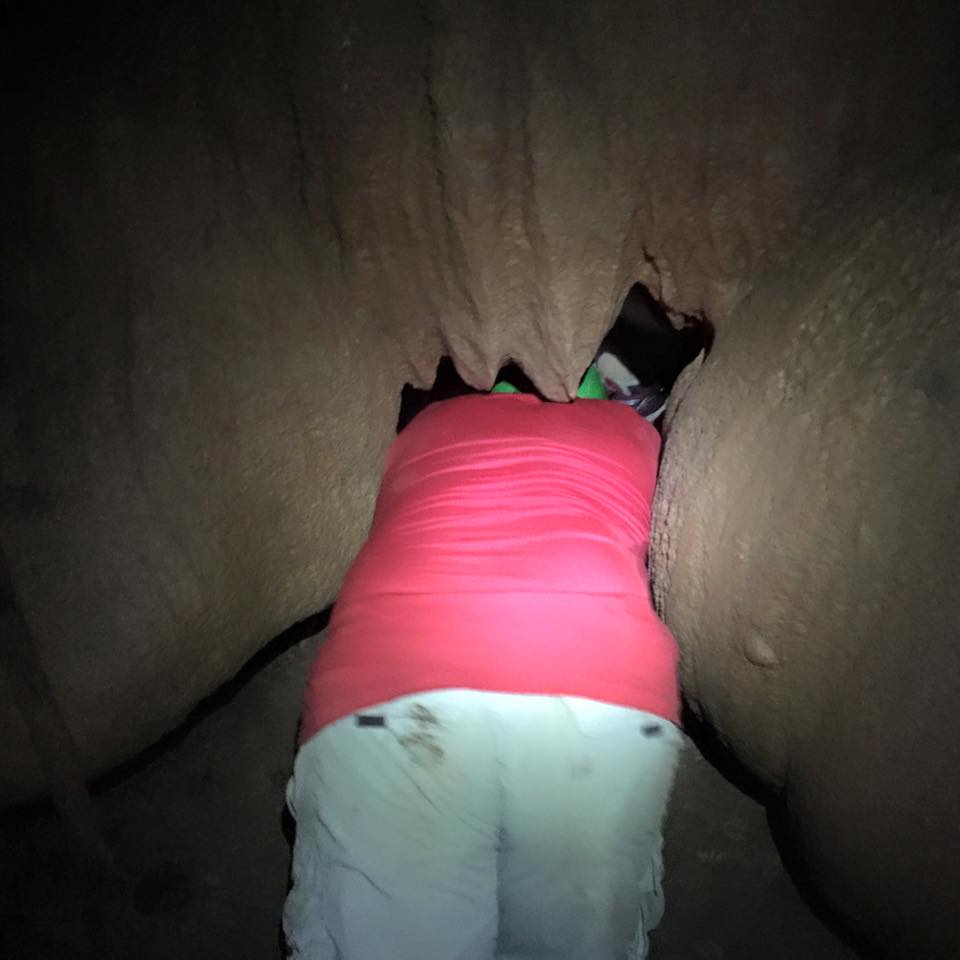 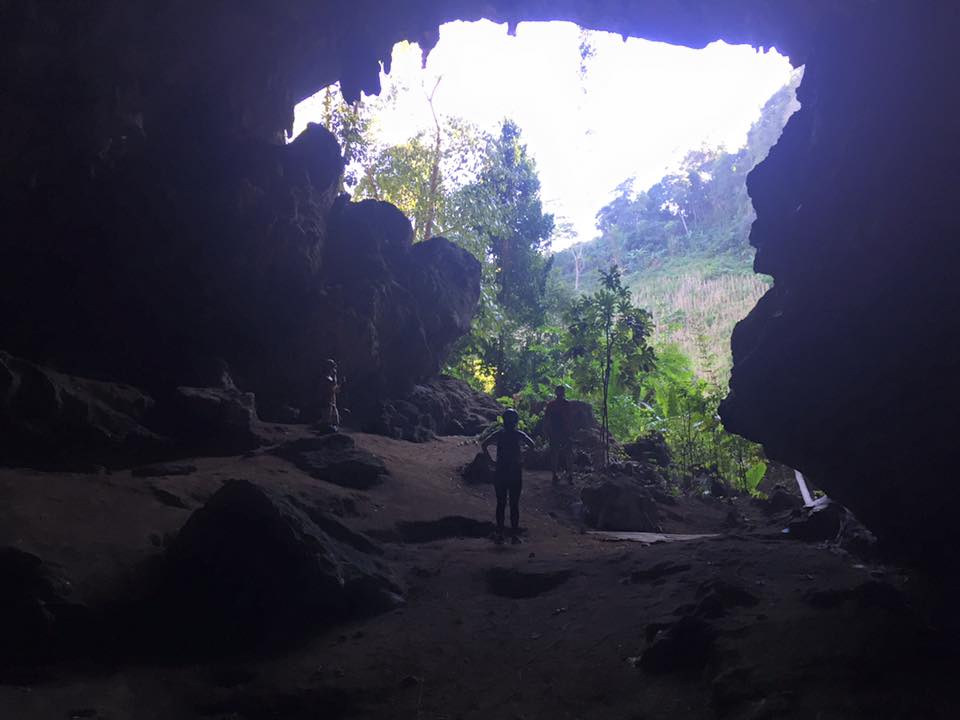 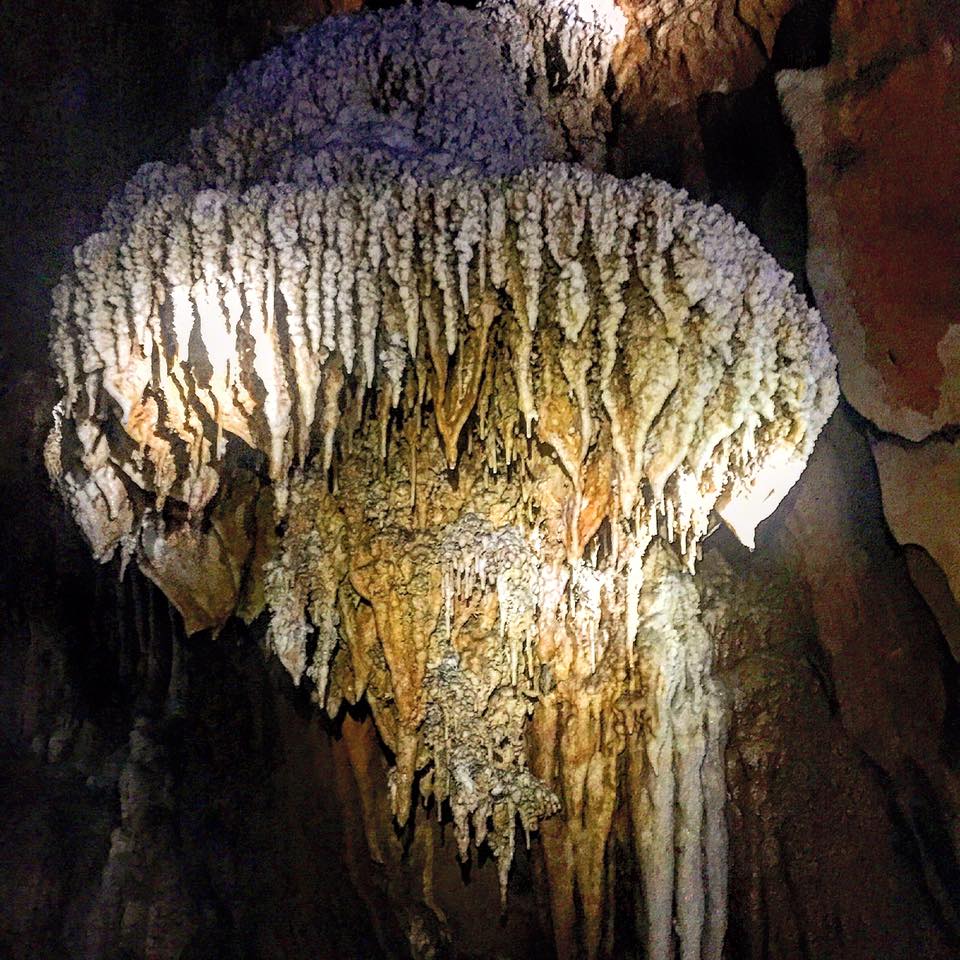