Every day in October I will be rocking an A To Z Blog Challenge about my terribly terrific tattoos. Every day a new letter. Today is October 2 so the letter of the day is B.

B is for the Bads. My first gang tattoo.

So I own a tattoo parlor in Tucson, Arizona. Seriously. It’s called the Magic Fun Store. It’s operated by my good friend, business partner and amazing all around artist Bruce Gulick. How did I come to own a shop in Tucson, Arizona you might ask? Well one day I told Bruce “If you ever want to open your own shop, I’d be happy to back you financially.” He moved to Tuscon and after about 6 months called me up and asked if my offer was still valid. I did a little research and by “research” I meant I asked the one guy I knew who had once lived in Tucson if it was a good idea and he said “There’s a lot of tattoo shops there but none of them are very good.” That was solid enough for me. Bruce told me he had found an affordable spot on the main drag of 4th Avenue next to a popular coffee shop and only a couple of blocks from the University of Arizona. Bruce sent me a few pics of the place and then a few days later I got a lease in them mail and signed it and sent it back with a check. A couple of weeks after that I was in Tucson for the first time ever to help Bruce round up the rest of the supplies we needed and then we staged our grand opening party which was really just me getting a tattoo of a Cupcake Minister – but that story is for tomorrow’s blog.

The second time I went to visit my tip just happened to coincide with one of my all time favorite bands – and favorite people – the Bouncing Souls. They also happened to be the first band I ever got a tattoo of. They were on tour with Bad Religion and playing at the historic Rialto Theater in Downtown Tucson – conveniently located right across the street from the Congress Hotel – my home away from home in Tucson and also the place where The FBI finally captured John Dillinger. What luck!! I “snuck” into the venue during soundcheck and surprised the guys. Needless to say they were simply ecstatic to see me 😉

After sound check we were hanging around and shooting the shit and the topic somehow got around to the BADS. A new “Gang” the guys had started. Bryan and the Pete explained that when they are on tour they get 3 hotel room every night, and the inhabitants of the rooms are divided up into the Sleeps, the Pots and the Bads. It was pretty easy to figure out what the Sleeps and the Pots did but I had to ask about the Bads. Bryan said “The Bads like to stay up all night and do bad things. You know what I mean,” he added with a wink. “You’re a bad – you should get a Bads tattoo. You can be in the gang! But I have to give you the tattoo.” Bryan had just started tattooing at that point but I was sold. So we decamped to the Magic Fun Store and Bryan gave me the tattoo right there in my own shop. He even picked up a few tips from Bruce. Bryan has since gone on to become an elite level tattoo artist and his done his fair share of Bouncing Souls related artwork on people. But I party hard knowing that I’m in an elite gang of trouble makers. The Bads. 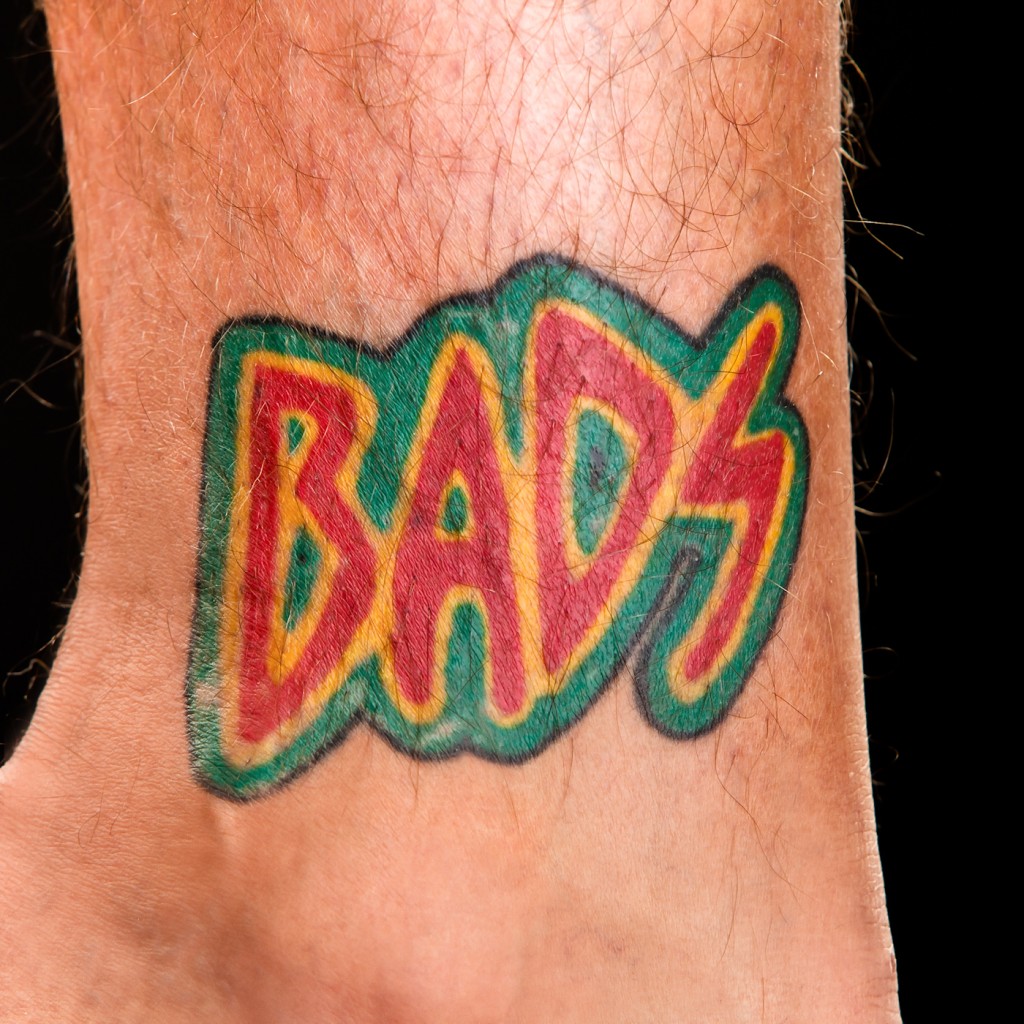 And here’s the greatest TV Commercial that has ever been made for Tattoo shop.