Every day in October I will be rocking an A To Z Blog Challenge about my terribly terrific tattoos. Every day a new letter. Today is October 1 so the letter of the day is A.

A is for Asshole… naturally.

Two things that don’t go together are tattoos and the beach. The worst thing you can do to a tattoo is let it stew in the sun. So why are there so many tattoo shops at beaches? Probably because the 2nd worst partner in crime for a beach is beer. Sunshine and alcohol combined leads to bad decisions – the financial life raft of any tattoo shop!

A couple of years ago I was wintering in Santa Monica and strolling the Venice Beach boardwalk when I became fascinated by the deliciously derelict tattoo shops and thought to myself “What kind of asshole gets tattooed at one of these shops? Probably the same type of asshole who asks for the Chinese symbol for ‘strength’ and walks out with the Mandarin marking for ‘pussy'” And that right there was my eureka moment.

I had to do a little research to figure out how to figure out what the translation was for “Asshole.” I hit up my homie Kid Koala and he told me there isn’t an actual exact word for Asshole but offered up the symbol for “anus.” That wasn’t what I was going for so I turned to the genius of Google translate. They didn’t let me down. At least I don’t think so. I took the symbol they gave me and brought it into the sketchiest shop of the bunch. I didn’t want to tell the sole tat rat on duty that Tuesday morning what I was up to, so when he asked what the symbol meant i said “I’d rather not get into it – it’s very personal” with a somber look on my face. Crisis averted.

As often happens when I show up at a random shop wearing long sleeves and looking for a small tattoo I got a little bit of an attitude. Sort of an “Oh god this newbie guy wants a tiny little tattoo. How cute.” Once I take off my shirt though their attitude changes. Most of the time it’s my full back piece or the Dolphin / Unicorn that gets their attention.

Not this jabroni. The first thing he noticed when I showed him where I wanted it was my Insane Clown Posse Hatchetman tattoo. Immediately he said “Oh man, nice hatchetman. I tattooed one of the guys from that band a few months ago. I gave him his kids’ name. They wandered in here because they were shooting a video in a warehouse nearby” I was a little skeptical and asked which one of that terrible twosome it was. He said “One guy is a fat with blonde hair right? It wasn’t him it was the skinny one.” That would be Shaggy 2 Dope.

The tattoo was quick and easy, but afterwards I was still skeptical, so I called my girl Kodi who works for the Clowns and asked if they had shot a video in LA recently. She said yes and I asked where. She said “Some warehouse a couple blocks off the beach in Venice.” And just like that I had the answer to my original question of “What kind of an asshole gets tattooed at one of these shops!” Assholes like me and Shaggy 2 Dope. 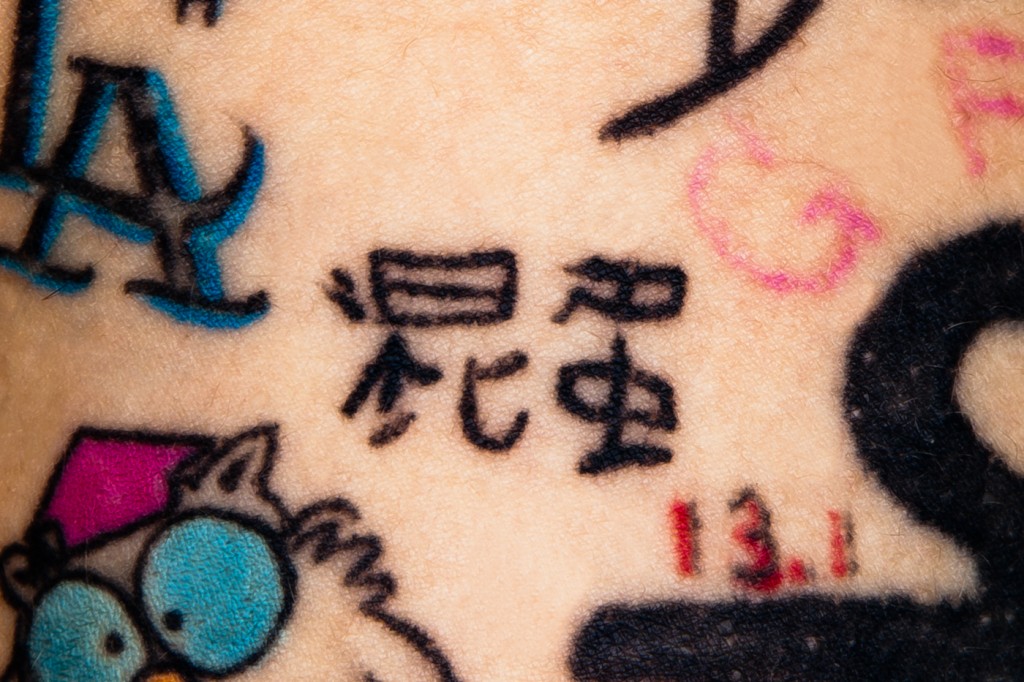 Deneka Peniston for the pics!