Every day in April I will be participating in the A to Z Blog Challenge. Each day I will write a post dealing with an issue that is near and dear to me that starts with the letter of the Alphabet the corresponds with the day of the month. Neat right? Today is April 8th so the letter of the day is H.

H is for Hot Tubs.

And 3 is the magic number – so here are my 3 favorite hot tub stories. The full stories of the adventures that birthed these stores will be coming in future instalments.

A few years back me and my buddy Ginger and some other friends were at the Rodeo Bar in NYC at 2am on a Sunday night, eating nachos, and drinking beer, as you do at the Rodeo Bar. When Dolly Parton came on the conversation quickly turned to how much we all loved her and then on to her theme park Dollywood. So of course that Thursday 6 of us were on a plane to Nashville for our pilgrimage to our theme park and music mecca. We hopped into a rented minivan and made our way to a house in the smoky mountains, one we picked solely based on it having a hot tub. Of course we all packed bathing suits. After a few dozen drinks we all hopped into the hot tub. Rockin Rodney Speed, who for this trip had boarded his first plane in over 40 years, was the last one out. He strolled out onto the patio in a white Terrycloth robe that had him looking a little bit like Hugh Hefner. When he took it off, he revelaed a rainbow striped speedo. It was the most magnificent thing we had ever seen. I complemented him on it and asked “Where on earth did you get that Rodney.” And if you know Rodney, you’ll know just how amazing it was when he said “The Village!! Where else?!?!”

Oh, did I forget to mention that we stopped at a store called Rebel Corner in Pigeon Forge, TN where She Who Will Not Be Named picked up this amazing Bikini? 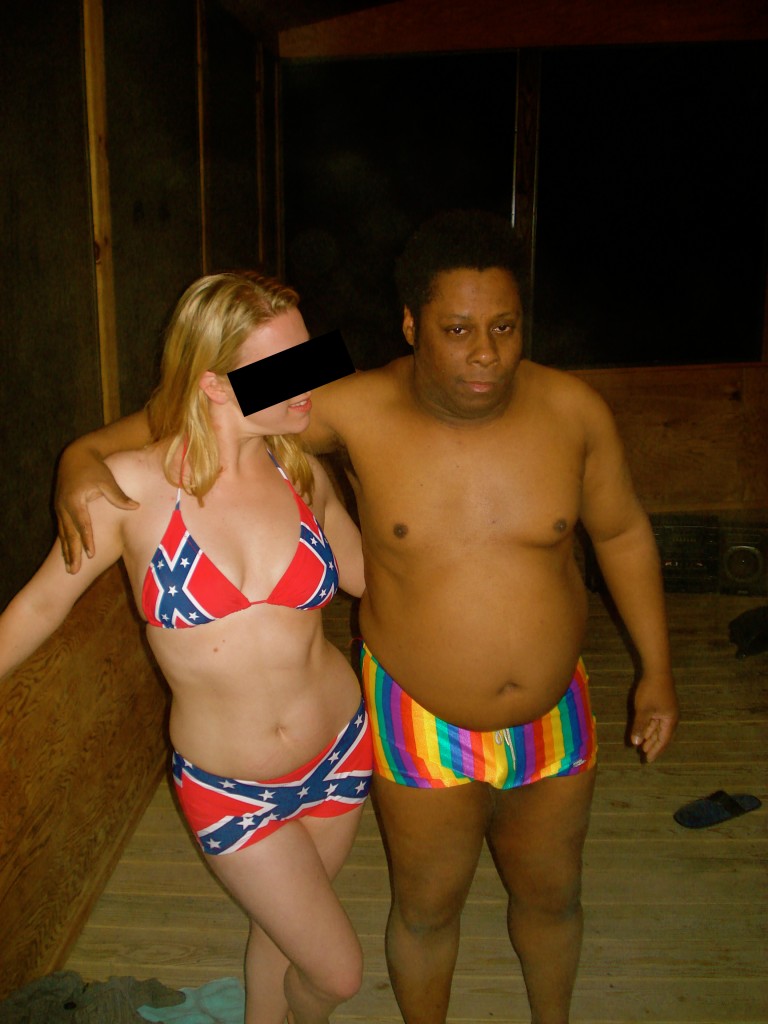 Photo by the Author

The night Michael Jackson died, I had a revelation. My band TRAGEDY: The All Metal Tribute to the Bee Gees needed to become DANGEROUS: The All Metal Tribute to Michael Jackson. I was on the phone with Eddie Eyball a few minutes later and he said he and Andy Action would love to be the rhythm section. So we made up the band right then and there and the next day I was booking us gigs. We booked a show to Headline the Norva in Norfolk, Virginia, the night before my birthday, so of course I was ecstatic. The Norva is known in the concert biz as having the absolute best backstage area in the whole US of A. It has a game room with video games, billiards and fooseball. It has a TV room with a giant flatscreen with cable. It has a basketball court. A dining room / kitchen where they cook for the bands. And best of all it has a fucking hot tub and sauna and several showers. Tragedy had opened for bands at the Norva but this time my band was headlining and I decided I was gonna let this night go to waste. Before we booked flights, or figured out what we were going to use for backline, I was on the phone with my friend Sebastian who I had met when we played the Norva with 2 Skinnee Js. I told him my plan. I said “Sebastian, for this show Im going to get 50 backstage passes, and I want you and your beautiful girlfriend to spend the night giving these passes out to the hottest girls at the show and explain to them that we will be having a hot tub party. And you need to be VERY adamant to them that NO DUDES ARE ALLOWED.” We even amended the words to our cover of Donna Summer’s Hot Stuff tat night to “Hot Tub” and Phil gave a little monologue about the party that would be happening.

The plan worked like a charm and not long after we got off the stage the backstage area was full of good looking girls. But there wasn’t a party atmosphere. It was weird. Something was missing. MUSIC! As soon as I realized there was no music playing I grabbed my iPod and fired up my “Little Nicky’s Durrrty South Hip Hop Mix” and got started with TI’s “Big Things Poppin” Before the first song was over several girls were naked in the hot tub. Did I mention earlier that I was the only single guy in the band and that none of my bandmates were scoundrels. I sure as shit made the most of that opportunity. Oh. What. A. Night.

The third hot tub story is actually part of a much longer story that will be coming in a few days. K is for Kid Rock. It involved flying to Milan, renting a BMW R1200 GS. Riding that to Cannes. Getting in my first motorcycle crash in Cannes an hour before I needed to be at the red carpet premiere for the U2 3D movie, and ending up seeing the sun rise from the hot tub on on Kid Rock’s yacht. Below is a pic of me at Peter Shapiro in said hot tub. 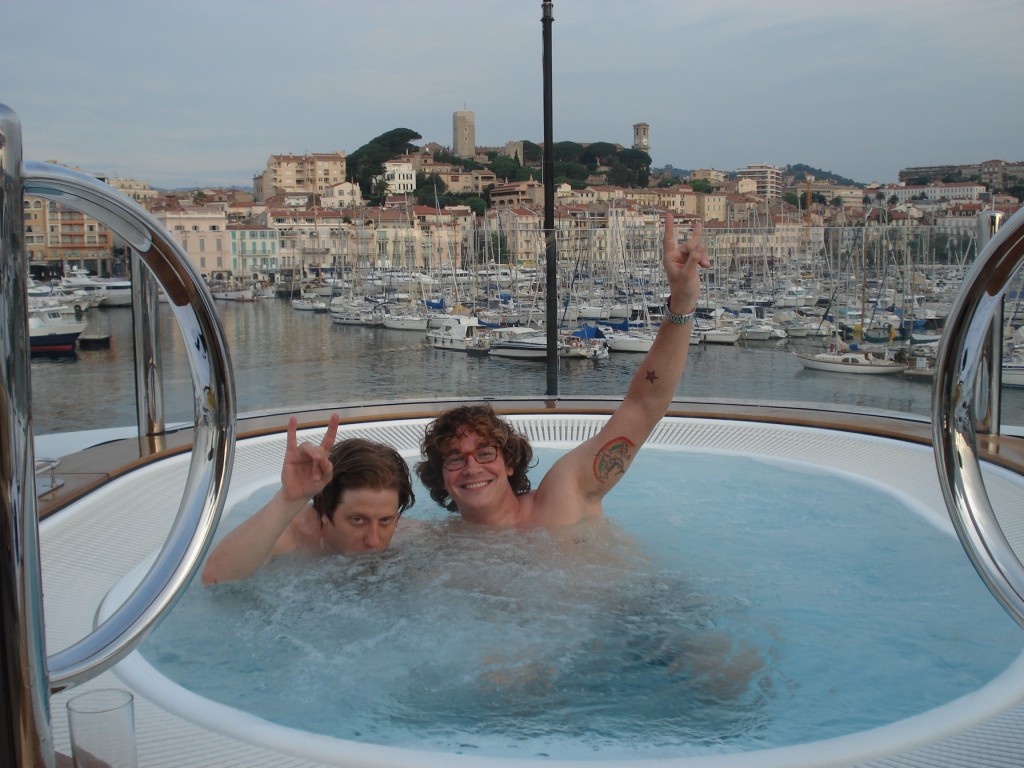