Every day in October I will be rocking an A To Z Blog Challenge about my terribly terrific tattoos. Every day a new letter. Today is October 8 so the letter of the day is G (I’m taking Sundays off)

G is for Go Fuck Yourself #GFY

Three simple words. So much power. The first time my band broke up, it came about when one member sent another member a scathing email (which we were all copied on) that ended with “GoFuck Yourself!”.  As soon as I read that sentence – I knew it was over.  And it really was a breath of fresh air as it had been too hard for too long to keep the whole house of cards from crumbling.  So I did my best to laugh it off and tried to at least salvage a farewell show.  That story might someday become a big long post of its own… but not today.

That night the words “Go Fuck Yourself” kept twirling around in my head so I created a facebook page called “GoFuckYourself” and invited a few friends for a laugh. The next day it had 100 likes.  A few days later 1,000 likes.  Today it’s got almost 5,000 likes and has taken on a life of it’s own.  I rarely update it anymore… am I less angry and outraged? Not really – just overwhelmed with my other projects.  If anyone is interested in becoming a moderator for the page lemme know. It could probably use a little TLC…er… GFY.

We even made a classy GFY logo and some pretty awesome t-shirts! 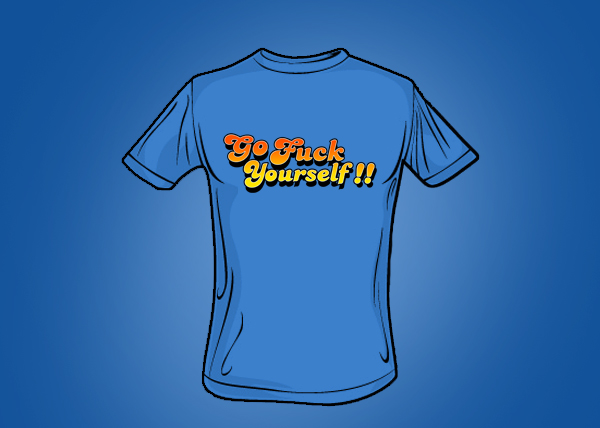 Get Yours Here. They make great holiday or ‘going away party’ gifts.

Much like when I got my Uniporn tattoo and my inbox became a lightning rod for anything Unicorn related – when I started the GFY page all of a sudden people were sending me everything and anything related to GFY.  But I didn’t have the tattoo yet. Initially I wanted to get “GO FUCK YOURSELF” tattooed on the inside of my lower lip – so I could just show it it rather than say it in certain situations.  But Tasha told me that it was too many letters and would get all blurred out.  Smart girl that one. But I didn’t want an acronym for my lip.  You type GFY but you say or SCREAM “GO FUCK YOURSELF”.  So it waited.  And I waited. For the proper time.

And the time came. My bromance Tommy Rockstar – the Guinness World Record Holder for Most Posts on Facebook –  had been on an epic quest to get each original member of Guns N Roses to sign his arm – and then he was getting them tattooed on as they happened. And it was kind of my fault. A couple of years prior he had been at the NAMM Convention in Anaheim and had waited in line to meet his hero Duff McKagan.  When it came time for Tommy’s turn to torment Duff he was offered an autograph, he had Duff sign his arm.  A few minutes later he texted me the pic.  My first reaction was to write back “Go and get that shit tattooed – NOW.”

Tommy: Im thinking about it.

Me: Thinking is for pussies – he is your hero – go STRAIGHT TO THE TATTOO SHOP

Me: DON’T BE A PUSSY

Then I went back to doing what I was doing, which was watching Misstallica play at the Mercury Lounge.  Like when They killed Kennedy – I’ll never forget where I was or what I was doing that day.  About six songs and three beers later I went out for a smoke and remembered how I had chastised Tommy so I sent him another text.  “Hey Tizzy I was just fucking with ya – DON’T DO IT”

His reply, like Tommy himself was priceless: TOO LATE

After our last session he typed “tattoo shop” into his iPhone and there was one across the street.  And went right over and got it inked.  Tommy is a lot of things… and “Go Getter” is right near the top!  Duff was #1 then came Slash, then Steven Adler.  Tommy and everyone else figured Izzy would be next and that his Great White Buffalo would be Axl, who come to think of it nowadays actually resembles a great white buffalo.  If great white buffalos had cornrows and debilitating mental disorders.  Turned out though, that Axl was easier than he thought. And it was Izzy that was the elusive one.  I’m not gonna spoil the plot for you, because someone even crazier than Tommy is MAKING A MOVIE ABOUT IT! 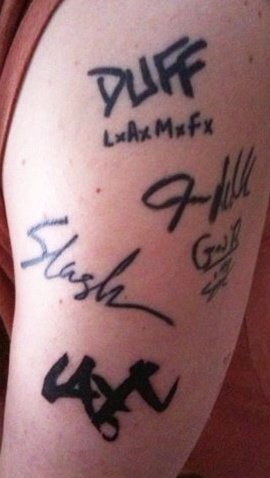 Tommy DID get Axl to sign his arm, and the next night I accompanied him to New York Hard Core Tattoos to get it needled into his arm.  It was a friday night so the booze was flowing. If you’ve never been to NYCH Tattoo you really owe it to yourself to get at LEAST one tattoo there.  And to do it on a Friday night.  I promised Tommy it would be a scene straight out of an SNL spoof of a  tattoo shop that also serves as a club house for really big men with a lot of neck tattoos from the New York Hard Core and punk rock music scene who like to start blowing their paychecks as soon as they get em.  And it didn’t let him down.  About 30 minutes after we got there, one of the regulars sprung through door announced “Tonight we’re gonna party!! I JUST GOT OFF PAROLE!!!!!!!” to a huge cheer from everyone in the shop.  I looked at Tommy and he just said “You told me so!”.

(Disclaimer: I’ve gotten about a dozen tattoos there, but none on my neck. The shop will feature prominently in my “P is for Pirate Fish” post coming later on this month.)

While Tommy was quite literally getting his Axl on, I was partaking in the Parole Party and decided that I too would get a tattoo on this day to increase my bond with Tommy from “longest NYC friend (who didn’t work at Wetlands)” to “blood brother” and my boozed up brain was trying to figure out what to get. By the time the artist was done with Tommy he told me “Look if you want something now it’s gotta be really quick, I wanna get out of here.” He was newly sober and had found jesus, so I think the parole partiers were beginning to get on his nerves. It might have been past midnight by then too.  But I told him “Cool. I got something that will be mad quick.  ‘GFY’ right here” and pointed to a spot on my arm. “In pink. Hot pink.” He said “OK” and started drawing it out on a piece of paper and I said “No.  Don’t draw it on paper. In fact, you can’t even draw it on my arm first. Just freehand that shit.” He wasn’t totally comfortable with the idea but I think my protest was slurred enough that he no longer gave a fuck.  And in hindsight, he was probably thinking “Go Fuck Yourself, buddy” because this is what he gave me.

As Bruce likes to say, “You get the tattoo you deserve”. Do you ever.