Up and at ‘em Thursday morning for the 6 hour drive to Glasgow.  Was quite looking forward to the drive as it’s supposed to be some beautiful countryside, but with all the snow, rain, and fog, we could rarely see more than 20 meters in front of us.  So it was a good chance to listen to all the Klaus Nomi records I’d been meaning to get through.  I’d been hearing that Glasgow was like a time machine, and for the little part of it we saw, it was straight outta 1976.  A very drunken 1976.  As soon as we got to the venue and walked inside, one of the crew guys said “You guys must be Tragedy.  Which one of you is Jake?”  I said me and he said “Your mum has been here, and went out to get a coffee.  She told us all to keep a good close eye on ya.”  There’s no keeping Estelle dfown.  I knew she’s own that town.

The Barrowlands is a huge old open room.  A giant old Bohemian Beer Hall that hasnt been touched by time or modern conveiences such as heat, hot water or disinfectant.  Yet it had kegfuls or charm.    It was situated in a somewhat rough area of Glasgow, and pretty quickly one of the venue crew guys told me Id probably be best off wearing a hat if I went for a walk outside.  I figured Id just spend the day inside the venue, and thats what I did.  But not before I ducked across the street to the local music shop.  It had a pink acoustic guitar in the window, so I figured it would have some more gems inside. And mate was I ever right.  I was quickly the proud owner of a hot pink fake fur guitar strap, a large handful of hot pink guitar picks, and a red foam, pop-screen microphone cover.
Tommy braved the neighborhood went out for a walk to try and get some modern medecine to help him with his dire case of Hand AIDS. 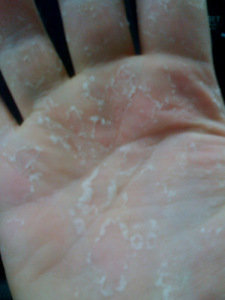 Somewhere along the way he passed a leather shop and picked out the perfect present for me.   A pink leather jacket.  Ladies cut.  Perfect for my girlish figure.  Though its at least 2 sizes too small, that adds to the charm, and I instantly decided that it was the newest addition to my stage attire.  As soon as I walked out of the dressing room with it, I was getting catcalls and whistles from the local Scottish crew.  I knew I had a winner of an outfit!
A new tradition stared in Glasgow as well.  The Glitter Bomb!  Scott Sorry, Wildhearts bass player, was sitting in the dressing room minding his own business, so I walked over and started shaking some glitter into his hair. When he offered no resistance, I upped the ante and dumped it on thick and heavy!  Even though he changed his clothes before they took the stage he looked phenomenal with his sparkly hair shimmering under the lights. 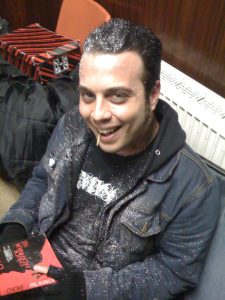 When my momma got to the Barrowlands earlier in the day, she asked the crew how many people it held. Even though they were Scottish, she understood what they were saying when they told her “Well, usually it holds 2,000 people, but a lot of the Wildhearts fans are going through their middle aged spread, so tonight we might only be able to hold 1,500 of them.”  Ah, a man after my own heart.  Ive forever been saying that in NYC we should institute a pay by waistline policy.  Seems the only fair way to do it.  Pay for the amount of room you’re gonna take up on the dancefloor!  You fat fucks.
When we hit the stage there were abut 500 people in the audience, and only 6 were up front,  And they were RIGHT up front.  Like “I’m here to see the Wildhearts, and I got here right at doors so I could be guaranteed a spot in the front row” kind of right up front.  We heard that the Glasgow crowd was gonna be the hardest to win over, especially for a bunch of dudes in white spandex and pink leather jackets.  When that happens though we just amp up the energy and attitude and dare people not to love us.  It usually works.  And Glasgow was no exception.  The room filled up steadily during our set and the crowd kept moving closer and closer to the stage.  There were a few guys in the back trying to heckle us between songs, and had we been able to understand them it might have worked.  But thats par for the course.  As Gav told us later “I think you really pissed off a few aggressively heterosexual guys in the crowd tonight.  Nice one mate!”
After the set I went down to the merch booth to greet our adoring throngs.  We were doing pretty well, selling CDs, shirts and posters.  And then I met our biggest fan.  A drunken Glaswegian hoochie ran up tot he booth, and grabbed me by the head and tried to suck my lips right off of my face.  Before I even knew what she was doing, she had moved over to Pete and showed him her tits, then moved on to Toby the Wildhearts merch guy.  While she was assaulting him, vampire style, I noticed a guy standing off to the side with a big blinking button on his shirt announcing his 30th birthday.  I asked him if it was indeed his birthday and he said yes. I then asked him if that was his girlfriend.  He let out a long sigh, and said “Allegedly” with a dejected look on his face.  I said sorry and he said “You’re the third guy she has done that to tonight”  Poor guy.  Later I heard from Lee, the Wildhearts bus driver, that she had been thrown out of the venue.  Imagine that.  All class.  All the time.
After watching most of the Wildhearts set from the side of the stage (holy SHIT they are an amazing band) I went back down the the merch table at the end of the night.  Tons of autograph signing and people taking photos with us. Thats not so hard to have fun doing.  But the Glaswegian accents are INSANE. Ginger told me a few times that he couldn’t wait to see the look on my face when people in Glasgow were talking to me, and I figured he was joking.  I mean how different could they sound?  The answer is “really fuckin different”
I mean seriously, I had to get Paul, our super mega-wicked-awesome driver, to come over and translate a few times.  It was insane.  We also came up with a new term for the dental stylings of many Scottsmen.  ”Jackpot Mouth”  Its the only way to explain why they have the selection of teeth they do.  Its like god pulled a lever on a slot machine and wherever the teeth ended up is how he sent them out to the world.
As bad is it got trying to understand these people, though, nothing compared to the Jackpot Mouthed pair of dudes we met at a service station on the outskirts of town.  They asked if we were in a band and that was the last time  I understood what they were saying.  I was really trying my hardest too!  I made them repeat themselves 5 or 6 times each time they tried saying something to me.  Finally I thought I understood what they were saying They were asking if we were headed back to England.  So I said “Yeah, we’re going back to England tonight.  Playing in Oxford tomorrow.`”  They just looked at me like I had 8 heads, because obviously they had asked a very different question than the one I had answered.  I musta looked like my heels were on fire and my ass was catchin’ and I ran to the bus, jumped in, and bid Scotland a moderately fond farewell.